“Maybe, life is not serious.“ 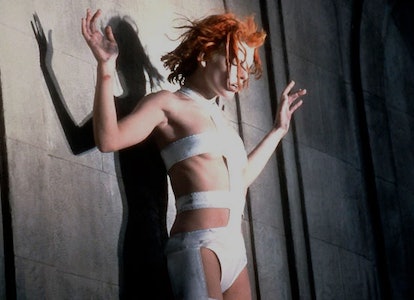 Within the first 20 minutes of his 1997 sci-fi classic, director Luc Besson takes the viewer to a drama between aliens and Egyptologists, a debate between preachers and generals in a presidential crisis, and a New York cab driver talk his way out of a stick-up. The movie’s energy is unstoppable, tossing in new surprises at a rapid-fire rate. The entire movie has the energy of a teenager, which makes sense when you realize that Besson started sketching out the initial ideas when he was 16 years old.

The Fifth Element features Bruce Willis, Milla Jovovich, Gary Oldman, and Chris Tucker in unforgettable roles, but what really makes them memorable in the first place is how they look. Comic book adaptations are a dime a dozen these days, but The Fifth Element still stands out for how intertwined it feels with comics.

You can watch it on Hulu until it leaves on January 31. Here's why this Bruce Willis sci-fi classic is worth your time.

Inspired by the work of French comic creators Pierre Christin and artist Jean-Claude Mézières, Besson contacted the two for ideas about the future of New York, with a heavy emphasis on flying taxis. Then Besson made the contact that would cement The Fifth Element’s legacy: designer Jean Paul Gaultier. Just as Besson saw flying taxis as the future of transportation, he saw Gaultier as the only person who could express what the future of New York fashion would look like. ”I wanted the best and that is Jean-Paul,” Besson said in 1997. ”He knows the color, he knows the flavor of New York.”

Gaultier, who in 1980 started out designing women’s clothes out of trash bags, had a reputation for turning conventions on their head, and then turning that into something nobody had ever seen before. “Is this cross-dressing, tailored-not-to-fit style a sort of fashion through the looking glass, a Dickensian carnival — or serious clothes?” the Washington Post asked in 1984. Gaultier replied, "I am not serious because, maybe, life is not serious."

By 1990, Madonna was asking Gaultier to personally design clothes for her world tours, to which he offered up a retro-futuristic cone bra. Inspired by the disheveled looks of his aging grandmother, as well as a blurring of gender identity, Gaultier created clothes that seemed to be rooted in an imagined past and looked towards an even more imagined future. The Fifth Element might as well be his masterpiece.

Thierry-Maxime Loriot of the Montreal Museum of Fine Arts, which in 2011 offered a retrospective on Gaultier’s work, said as much. “A thousand costumes is like 10 collections but all for one movie. It’s an incredible amount of work people don’t even know about. For a thousand costumes, he may have even done 5,000 sketches before narrowing it down.”

Leeloo’s bandage dress, Ruby Rhod’s endless leopard print that supposedly drove Prince away from taking the role, Korben Dallas’ colored undershirts, the Day-Glo medical wear seen in Leeloo’s early captivity, and even the surprisingly sexy outfits at McDonald’s — no role was too small for Gaultier. Looking back on the experience for Vogue, he said, “I love the collaborations in the movies or dance as they are a bit of a fresh air for me; I try to do Gaultier, but in the service of the story and the director.”

Watching The Fifth Element now really speaks to that dance. There’s Jovovich, only 19, in her first sci-fi movie. She has said that when she first appeared in the bandage dress on set, there was “a hush, which is really bizarre when you think that there's over 200 people around you, and everything is deathly quiet. You could just feel this incredible energy.”

Her role is far from perfect. It's part of where having a 16-year-old's movie come to life gets shaky. Leelo is the quintessential trope of giving a fully grown, fully sexualized woman a childlike sense without even being able to communicate. But Jovovich's performance shines through the tropes the best she can.

Then there’s Besson, trying to honor his teenage self with a story of a cab driver and supreme being saving the universe through love. While the movie spends a little too long setting up its world, it’s hard to complain when everything is so interesting. He would continue exploring in later movies, but big summer action movies have by and large abandoned the bright and daring visuals of The Fifth Element. It's worth seeing what they've missed.

The Fifth Element is streaming on Hulu through January 31 in the U.S.