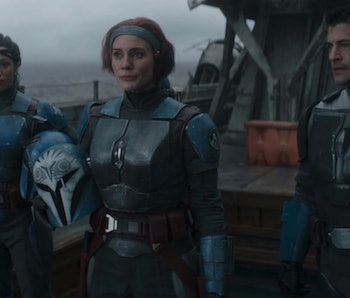 It’s a Renaissance of Mandalorian leaks. This week alone, there have been claims of Praetorian guards with Mandalorian-style helmets, a set featuring the mines of Mandalore, and a hazy description of an Olympic-like religious ceremony involving a number of Mandalorians — and bizarrely a mythosaur.

But there’s yet another leak surrounding The Mandalorian Season 3, and this one contains a familiar face who might help play a more significant role in the hit Star Wars show.

One was Koska Reeves, played by WWE Superstar Sasha Banks, and the other was Axe Woves, played by Simon Kassianides. Many fans forgot about Axe, mainly because he didn’t appear in the Season 2 finale.

According to Sackhoff and Kassianides, there’s a bigger reason for Axe’s absence than just coincidence. Perhaps, while Bo-Katan and Koska were off helping Mando rescue Grogu, Axe was out trying to rediscover Mandalore and revitalize it for a new era of Mandalorians. This would certainly explain the recent set photos that look like the “living waters” teased in The Book of Boba Fett.

Considering how Sasha Banks confirmed she would not appear in The Mandalorian Season 3, Axe Woves could be the new right-hand man for Bo-Katan, spearheading this supposed co-operation between her faction of the Mandalorians and the orthodox Children of the Watch.

If this leak is to be believed, it could mean the beginning of a lofty career for Axe Woves. As the rightful bearer of the Darksaber, Din Djarin is set to unite the Mandalorians and lead them, but he can’t do that alone. With The Armorer and Bo-Katan at odds, maybe this Mandalorian character is the liaison the creed deserves.

So after hiding behind two all-star casting choices, Axe Woves may just be the savior (or assistant to the savior) The Mandalorian has been waiting for.