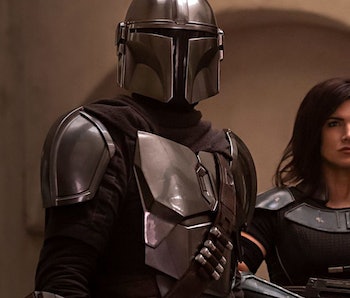 In a time of uncertainty for Star Wars fans, one thing has remained steady throughout: The Mandalorian Season 2 release date. The Disney+ series wrapped filming in February, and the prospective release of October 2020 has yet to be changed. While the series production remains on track, Lucasflim has yet to release even a hint of a glimpse of a new trailer. However, a recent leak gives specific dates we might see our first look at Season 2 of the live-action Star Wars show, along with some pretty compelling evidence.

According to LRM Online, The Mandalorian Season 2 trailer will air during the NBA playoffs this weekend, during either Game 2 (which airs August 20 at 9 p.m. ET on ESPN), or Game 3 (set for August 22 at 8:30 p.m. ET on ABC. Though lacking official confirmation from Disney or Lucasfilm, there is some substance to these rumors.

Disney was supposed to host Star Wars Celebration between August 18-21, though canceled the event due to the ongoing health crisis. Since the first trailer for the series debuted at Celebration last year, the Season 2 trailer was widely expected to follow suit this year. Should a trailer premiere during one of these games, it would be right on schedule.

The NBA playoffs are the perfect venue for this release. As Disney is taking charge of the NBA "Bubble," Star Wars would fit right in. In a time when live sports options are scarce, the playoffs would be the best opportunity to get the most eyes on the footage.

The question remains, what could possibly be in this trailer? With the release date only two months away, there's not a lot of time to spend teasing, so we suspect trailer will include a glimpse at a long-rumored character that has stoked fans' anticipation of the new season: Rosario Dawson as Ahsoka Tano.

The protagonist of The Clone Wars is a high-profile character in the Star Wars universe, so it's likely she'll make an appearance in the new trailer along with Season 1 villain Moff Gideon, last seen menacingly holding the Darksaber.

A trailer reveal would be a reassuring sign post-production is right on track and fans can still expect the season to air in October. The exact air date is still unknown, but a new trailer brings the opportunity for a dramatic date reveal. Considering the present lack of new Star Wars content, it can't come too soon.

The Mandalorian Season 2 premieres on Disney+ in October 2020.