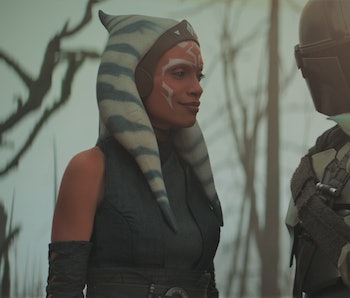 Next stop, Tython? The Mandalorian Season 2 heads into uncharted territory this week, after Ahsoka Tano refused to train Grogu (aka Baby Yoda), instead sending the duo to search for other Jedi.

Chapter 14 is still a big mystery and anything could happen. Here’s everything we know about the sixth episode of Season 2 so far, including release date and time, plot, and more.

What is the release date of The Mandalorian Season 2 Episode 6?

Season 2’s sixth episode debuts on Disney+ on Friday, December 4. This is in line with the remainder of the series’ installments, which have been made available every Friday since Season 1.

What is the release time for The Mandalorian Season 2 Episode 6?

Chapter 14 is scheduled to be released at 3:01 a.m. ET on December 4. Depending on where you live, the timing of when fans can watch will vary. Regardless of whether or not you’re planning to watch as soon as the episode drops, it’ll be available to watch on Friday.

What is the runtime of The Mandalorian Season 2 Episode 6?

The runtimes have been all over the place in Season 2. Episode lengths have ranged from being nearly an hour long to a little over a half an hour. However, the sixth episode of Season 2 might just be the shortest one yet. Per a leak from FSK, a German organization that sets motion picture ratings, Chapter 14 will be 32 minutes long. While the information has been removed from the site (Disney and Lucasfilm are a fortress of secrecy), FSK has been reliable in the past and there’s no reason to believe that it’s inaccurate this time.

What is the plot of The Mandalorian Season 2 Episode 6?

As with every episode of the Disney+ series, the content of the sixth episode is an enigma. Based on the ending of Chapter 13, Mando and Grogu are likely headed to Tython next. However, it’s possible that Din Djarin will be sidetracked once more before reaching their destination.

Fans will remember that Moff Gideon can now track Mando’s whereabouts across the galaxy and the ruthless villain might intercept the Razor Crest before the pair ever land on Tython. That said, it’s unclear who will appear in the episode and in what capacity, but here’s hoping that Boba Fett will show up in the episode.

What is the title of The Mandalorian Season 2 Episode 6?

A title for Chapter 13 has not been released yet. Way back in April, a leak suggested that the episode would be called “The Sorcerer.” Considering that the leaker has been wrong about the previous five episodes’ titles, it’s a safe bet that “The Sorcerer” is not at all accurate. Either way, we’ll find out soon enough.