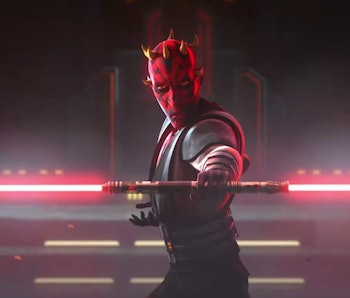 No one's ever really gone in the Star Wars universe. Thanks to cloning, Force ghosts, flashbacks, holograms, and all manner of outer-space wizardry, dead heroes and villains have a habit of returning to the storied sci-fi franchise in one way or another.

The latest episode of The Mandalorian introduced Magistrate Morgan Elsbeth into Star Wars canon. The tyrannical villain controlled and terrified the citizens of Calodan, the small town Ahsoka Tano visits on the forest planet Corvus. A new leak reveals a major Darth Maul connection that could establish Morgan as one of Star Wars’ most dangerous villains.

Spoilers ahead for The Mandalorian Season 2, “Chapter 13: The Jedi.”

Ahsoka returned to Morgan's fortified residence several times in a bid to obtain the location of Grand Admiral Thrawn, a leader with the Galactic Empire. Ahsoka eventually teamed up with Din Djarin to breach Calodan’s walls and confront Morgan, but the magistrate may have been the one to look out for all along.

Maria Sandoval, The Mandalorian’s hair stylist, posted a photo to Instagram of Diana Lee Inosanto in costume as Morgan Elsbeth. In the caption, Sandoval reveals Morgan was “one of the last survivors of Dathomir.” The caption has been edited to remove that bit of information, but a fan took a screenshot and posted it to Reddit. The fact that the caption was edited suggests that the magistrate’s background is accurate and it was too much of a spoiler to remain public.

Dathomir is famously the home planet of Darth Maul, the Sith lord who was trained by Emperor Palpatine and went on to become a scheming villain in his own right. Maul fought Ahsoka in the animated Star Wars: The Clone Wars and died at the hands of Obi-Wan Kenobi in Star Wars Rebels. With that in mind, it’s not likely that Maul will show up at all in The Mandalorian. However, there’s another way that Morgan can carry on his legacy.

In the book The Star Wars Archives: 1999-2005, George Lucas revealed that Maul was actually training a female Sith who went by the name Darth Talon. It’s possible that Morgan Elsbeth was Maul’s mystery student who was being groomed as his successor. Talon could have been Morgan’s Sith name, similar to how Sidious was Sheev Palpatine’s secondary name.

According to Lucas, Maul was supposed to be the primary villain for the new sequel trilogy, but J.J. Abrams and Disney execs decided that Palpatine was the way to go. The Mandalorian could course-correct by setting up Morgan as the next big bad without disputing existing canon. The magistrate clearly has a lot of power on Corvus (and likely within the Empire’s ranks) and can hold her own in a fight against Ahsoka.

Perhaps Morgan’s background was kept as vague as possible so that her Maul connection could be revealed at a later time. Whatever the case may be, the magistrate could return with a lot more influence in Season 2 of The Mandalorian. Moff Gideon shouldn’t get too comfortable as the series’ villain.

Note: An earlier version of the article incorrectly stated that Maul was slain by Owen Lars. The information has been has been updated to reflect the change.