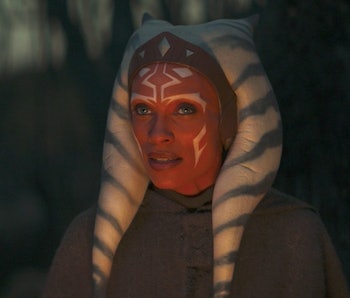 Ezra Bridger has vanished. In roughly the same year as A New Hope, the young Jedi and Grand Admiral Thrawn jumped a Star Destroyer called the Chimaera deep into hyperspace. This heroic act of sacrifice effectively ended Rebels in 2018. But, the coda to Rebels added a wrinkle: Rebel warrior and Mandalorian Sabine Wren joined forces with Ahsoka Tano to look for Ezra, vowing to "bring him home."

The Rebels finale takes place just before A New Hope, then jumps ahead to right after the Battle of Endor in Return of the Jedi. Chronologically, this was the last time we saw Ahsoka Tano until her groundbreaking appearance in The Mandalorian. So how does Ahsoka's current timeline compare with the end of Rebels? Ahsoka's mention of a certain Imperial admiral gives us three options about what she's been up to all this time.

Spoilers ahead for The Mandalorian, "Chapter 13, The Jedi."

Ahsoka could still be searching for Ezra Bridger — The Mandalorian takes place in 9ABY, five years after Return of the Jedi. In the post-Endor flash-forward in Rebels, Sabine doesn't specify when she and Ahsoka begin their quest to find Ezra, she simply says "But one day, I realized there was more to it. There was something else I was meant to do. Ezra's out there somewhere, and it's time to bring him home."

Here's the thing: Sabine's post-script just says "one day." From the point-of-view of Ahsoka in The Mandalorian, that day could have been years prior or still in the future. Because Ashoka is looking for Grand Admiral Thrawn in The Mandalorian, we could make the leap and assume that is connected to her search for Ezra Bridger.

So, if she is still searching for Ezra Bridger five years after Return of the Jedi, where's Sabine? Well, either Sabine is waiting in the car somewhere, or Ahsoka picking up Sabine hasn't happened yet. Notably, Ahsoka's robe and outfit in the Rebels coda is nothing like what she's wearing in The Mandalorian. That alone could mean that Ahsoka's Mandalorian activities occur before the last scene in Rebels. More to the point, it's possible that because Sabine just says "one day" literally five years happen during that post-script, in addition to the four-year jump (from ANH to ROTJ) that's already established.

Ahsoka and Sabine have split up — If we assume Sabine and Ahsoka went looking for Ezra in roughly 4ABY, then, by 9ABY, it's possible they are still searching during the events of The Mandalorian. If we're following a straight line from the end of Rebels, then the easiest way to make this all work is to just say: Sabine and Ahsoka are still looking for Ezra, they haven't found him yet, and they're following different leads.

Sabine is a pretty resourceful Mandalorian after all, so it seems reasonable that Ahsoka might have gone after one clue about Ezra, while Sabine went after another. Either way, Ahsoka's appearance in The Mandalorian could be smack-dab in the middle of her and Sabine's quest to find Ezra.

Ahsoka wants to find Thrawn for a different reason — The last option is possibly the most mysterious. The absence of Sabine and the line from Ahsoka about the scarcity of the Jedi could lead us to believe Ahsoka isn't looking for Ezra anymore. This either means she gave up, Ezra's dead, or she found Ezra but the outcome was disappointing. In any of those scenarios, Ahsoka searching for Grand Admiral Thrawn suddenly becomes unconnected to the search for Ezra. If that quest is over — either because of failure or not — then Ahsoka's motivations for finding Thrawn are totally unclear.

Thrawn caused a lot of trouble for Ahsoka in Rebels, and while it doesn't seem likely that she's seeking revenge, we can't totally rule it out. Famously, there was a time in 1982 when we all thought Return of the Jedi was going to be called Revenge of the Jedi. Star Wars has never revisited that title, but if that became The Revenge of Ahsoka, well, who wouldn't want to see that?