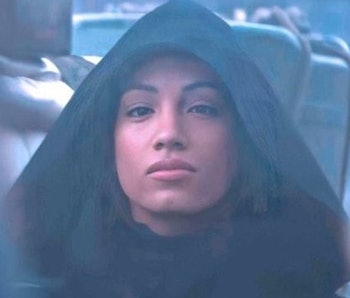 The Mandalorian Season 2 trailer confirmed that WWE star Sasha Banks plays a mysterious, cloak-clad character in the Disney+ show. However, neither Disney or Lucasfilm have revealed the identity of her character, and how she will interact with Din Djarin and Baby Yoda. With only a few days left before The Mandalorian’s Season 2 premiere, Banks’ role is remains a huge mystery.

Is the pro wrestler playing Sabine Wren? Doctor Aphra? An entirely new character? We asked more than 1400 Inverse readers about who they think Banks is playing in Season 2. Here’s what they said.

The Star Wars universe is vast and includes a myriad of characters from across the comics, books, and animated series. First introduced in Star Wars: Darth Vader #3, Doctor Aphra is a morally ambiguous archaeologist who worked alongside Vader for a bit before he tried to kill her. Considering that Aphra is popular enough to warrant the launch of her own audiobook and comics, it’s possible that Banks is bringing her to life in The Mandalorian — at least 92 fans from the poll seem to think so.

It’s unclear if Banks’ character is actually spying on Din and Baby Yoda or if it's simply great editing at work, but it may be that it’s Aphra who is following them on their adventure. Perhaps they have an artifact that she’s been hunting for some time. Either way, Doctor Aphra’s potential arrival would bring together the worlds of the comics and books and merge them with live-action.

Early reports suggested that Ahsoka Tano would be making her live-action debut in The Mandalorian Season 2 and that Rosario Dawson had been cast to play her. However, it seems 331 fans in our poll aren’t convinced that Dawson is Ahsoka at all and believe that Banks will be playing her instead. The wrestler appears to be wearing a dark hood in the Season 2 trailer and there’s a chance she’s tailing Din Djarin and Baby Yoda for the Jedi.

That said, Ahsoka’s look is much different in The Clone Wars. She’s an alien while Banks’ character is very clearly human. Even their cloaks of choice are different colors (Ahsoka wears white, Banks is donned in black). Sure, there’s a chance that it is Ahsoka and Banks is merely disguised in this scene. However, considering how shrouded in mystery Ahsoka’s potential appearance is, it’s doubtful that The Mandalorian trailer would give her arrival away.

Rumors swirled that Banks will be playing none other than Star Wars Rebels’ Sabine Wren, so it’s not surprising that 397 readers think that Banks is playing the character. Sabine is incredibly important to Star Wars lore — she’s a Mandalorian bounty hunter who went on to become an engineer and weapons expert. She’s also a Resistance fighter.

Banks potentially playing Sabine is a big deal because she wielded the Darksaber, which somehow ended up in Moff Gideon’s hands by The Mandalorian’s Season 1 finale. With Din Djarin out looking for additional Mandalorians in Season 2, it makes sense that he and Sabine might cross paths. Banks as Sabine could also set up a fantastic battle between her and Gideon in a bid to reclaim the Darksaber for Mandalore.

635 fans believe that Banks is playing an entirely new character specifically created for The Mandalorian. With a completely blank slate, Banks would arguably have the freedom to make her own mark in the Star Wars universe. Plus, Banks wouldn’t have to wrangle with preconceived standards of what her character should be.

Doctor Aphra, Ahsoka Tano, and Sabine Wren have a lot of history within the Star Wars universe. However, similar to how Din Djarin and Baby Yoda were developed for the series, Banks’ character may be following in their footsteps. A new character creates endless possibilities for The Mandalorian and the story that lies ahead.