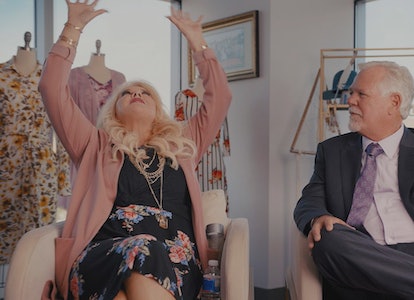 What do you think of when you think of cults? Drinking kool-aid, singing hymns, maybe some weird mind control?

Well, while those elements certainly are present in several cults, some of the largest active cults are much more difficult to identify. In fact, you may not see them as cults at all. That’s what makes them so dangerous.

This 2021 four-part docuseries, now streaming on Amazon Prime, breaks down what looks like a fantastic opportunity for women and reveals the terrifying control that lies within, all wrapped in the guise of comfortable leggings.

LuLaRich follows the unstoppable rise and inevitable fall of clothing multi-level marketing company (and alleged pyramid scheme) LuLaRoe. Begun as a well-intentioned way for young women to start their own businesses, LuLaRoe quickly spiraled into a web of manipulation, nepotism, and shady legal practices.

Mormon couple Mark and Deanne Stidham founded LuLaRoe, and from the get-go, the pair established their family as unlike any others. When Deanne married Mark, she had seven children, four biological and three adopted from Romania. Mark had four children of his own. Together Mark and Deanne adopted three other children, bringing the total up to 14. (While having 14 kids is unusual enough, what is even odder is that two of their adopted children eventually married each other.)

When their startup company, which sold comfortable and loud-patterned clothes, took off in a major way, they wanted to support their family. So, they hired their children and relatives in high-powered positions.

Altogether, this is all a recipe for catastrophic growth. What makes LuLaRoe a likely pyramid scheme is how they made money not by selling goods but by recruiting others to be distributors. The company grew exponentially, and the executives weren’t able to keep up with the growth.

But what makes LuLaRoe a cult? Well, those involved are working to please and seek the approval of Mark and Deanne, even if that means selling breast milk to afford the startup package or getting a risky weight loss surgery at Deanne’s urging.

Sure, there’s no religious element to LuLaRoe (aside from the Stidhams’ Mormon teachings leaking into their business model), but that doesn’t mean they’re not a cult. Just one look at the loud, clashing patterns and huge parties run by Deanne’s nephew, and it’s clear this is a group that has complete financial control over its followers.

And that’s not all. LuLaRoe leaders urge everyone to make their social media page entirely about their business, promoting a lavish lifestyle to prove how successful they are. Every part of their life had to revolve around the company to make any profit. So, not only was LuLaRoe controlling its followers' financials, but they also had complete lifestyle control.

It’s clear Mark and Deanne didn’t set out to start a cult. They had only the best intentions, as their participation in LuLaRich underlines. But sometimes cults aren’t created; they just happen. And the worst impulses in the leaders’ personalities are brought out, whether that’s something deadly like a mass suicide or just profiting off a false idea of success.

Sure, LuLaRoe may not be your classic cult, but in a way, that’s what makes it even more insidious. Not many of us know someone who has packed up and moved to a reclusive commune, but people in multi-level marketing companies are everywhere. The line between a company and a cult seems to get blurrier by the day.