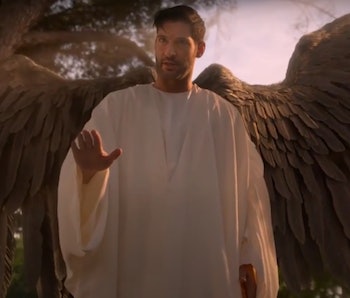 Father Kinley prophesized that “when the devil walks the Earth and finds his first love, evil shall be released.” Initially, Lucifer believes his first love is Eve. But they’re only together for a hot minute before he breaks things off with her. The end of Lucifer Season 4 sees demons released from Hell, implying that prophecy has been fulfilled. However, an intriguing new theory suggests a far grander scope to Kinley's prophecy, and Michael’s abrupt appearance in Season 5 could play a major factor.

Spoilers ahead for Season 5 Part 1 of Lucifer.

At the end of Season 4, Lucifer realized Chloe was his first love, not Eve, and decided to return to Hell to stop the demons from escaping to Earth. Michael’s arrival in Season 5 temporarily put their relationship on pause. After masquerading as Lucifer for an episode, the devil returned to Earth and squashed Michael’s schemes altogether.

However, Michael continued trying to divide his twin brother and Chloe Decker, even after they got together. Lucifer’s return didn’t deter the wily archangel and Michael merely adjusted his plans. On the surface, it seemed Michael’s goal was to upend Lucifer’s life due to their centuries-old rivalry for God’s affections. But there may be a more important reason behind Michael’s quest to keep Chloe and Lucifer apart.

Reddit user MarioMan1213245765 argues the evil denoted in the prophecy was actually the antichrist, and the reason Michael’s been working so hard to keep Lucifer and Chloe apart is to prevent them from conceiving this child. The theorist argues that if the antichrist is born, Michael will have to fight him to save the world. His meddling in Lucifer’s life is simply to prevent all that from happening.

In Christianity, the antichrist is depicted as Jesus Christ’s evil opponent and the antithesis of everything he stood for. In certain teachings, the antichrist is believed to arrive right before the end of the world. After all, the series made it a point to include a prophecy and has yet to deliver on its promise of evil being released upon the world. One could argue that the evil is Michael himself, but that’s perhaps too limited in scope. With both Michael and God’s arrival in the first half of Lucifer Season 5, it’s possible that the end of the world is nigh or, at the very least, has been accelerated.

The Inverse Analysis — This theory hinges on the idea that Michael actually cares about saving humanity, but there's little evidence from the show so far suggesting that he feels this way. He seems delighted to merely cause chaos for his brother. However, we know Lucifer Season 5 was supposed to be its last, which means the arrival of the antichrist — whether by way of Lucifer and Chloe’s union or not — might become the setup for Season 6.