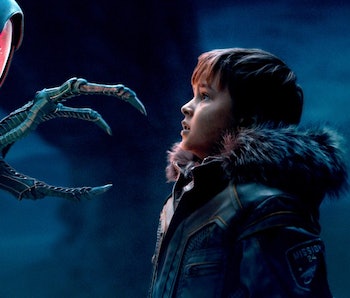 This article about Season 3 of the series Lost in Space was originally published on July 11, 2020 and updated on January 22, 2022 following the release of the season on Netflix. Read on for the original article, with some new changes to reflect the latest updates on this topic.

If you haven’t been binging the Netflix Lost in Space reboot, you’ve been missing out. Back in the early 2000s, it was hard to believe that Lost in Space would ever make a huge comeback. Some writers (myself included) wrote off the original series as totally unsalvagable and too cheesy to survive. The 1998 reboot of the movie didn't do the franchise any favors and seemed desperately in search of geek cred and mainstream acceptance at the same time. Before 2018, the cast of Lost in Space was almost entirely white and male, making its relevance questionable in a contemporary setting.

But, the 2018 Netflix reboot of Lost in Space changed all of that. The new series is smart, diverse, and better science fiction than most mainstream TV. It also manages to keep some of the quirky charms of the original series, even if Parker Posey's Dr. Smith steals the show every single time.

At the end of 2021, the Robinson family went on one final adventure. Here’s everything to know about the final season of Lost in Space on Netflix.

Is Lost In Space Season 3 confirmed?

Yes. After Season 2 was released in December of 2019, the renewal of Lost In Space for another season was actually uncertain for quite a while. That changed on March 9, 2020, when Variety confirmed Season 3 was underway.

When was the Lost In Space Season 3 release date on Netflix?

Lost in Space Season 3 premiered on December 1, 2021. Back in 2020, it was promised that Lost in Space Season 3 would come to Netflix sometime in 2021. Luckily, despite the coronavirus pandemic shuttering filming worldwide for film and TV, they were able to get the final season in the can and out within the promised year.

How many episodes did Lost in Space Season 3 have?

Lost in Space’s final season consisted of eight episodes. That’s a deviation from the previous two seasons, which each had ten.

What is Lost in Space?

Lost in Space is a contemporary remake of the 1965 family/sci-fi series of the same name. Lost in Space represents the third (aired) version of the concept and the fourth version overall. (In 2004, John Woo directed a pilot for a series called The Robinsons: Lost in Space, though it never aired.)

In all versions, Lost in Space centers on the Robinson family and their adventures aboard a spacecraft called the Jupiter 2. In 1998, Lost in Space was remade into a mainstream summer blockbuster starring William Hurt, Matt Leblanc, Gary Oldman, and Heather Graham. Written by Akiva Goldsman, the film was considered to be a critical and financial failure at the time, though it has gained a cult appreciation more recently.

The original first season predated Star Trek by one year and was shot entirely in black-and-white. This first season was far darker and more realistic than the subsequent seasons, which makes the original legacy of Lost in Space are somewhat mixed. The show is most famous for the scheming Dr. Smith (Jonathan Harris), young Will Robinson (Bill Mummy), and a friendly robot whose most famous catchphrase was "Danger, Will Robinson."

The Netflix series takes a hard science fiction approach to the material but retains the family dynamic. The Robot in the new series is also more focal, mainly because the Robot is also an alien robot. It has been met with critical acclaim, proving that the old-fashioned perception didn't dissuade new viewers. While the Lost In Space fandom certainly has many longtime fans of the original series, a huge portion of its fans is brand new.

Where did Lost in Space Season 2 leave off?

At the end of Season 2, the survivors of the massive colony ship, the Resolute, were forced to split up. All the children were put on one of the smaller Jupiter spacecraft, while the rest of the humans stayed behind. Judy Robinson was put in charge of this spaceship full of kids and encountered the long-lost spaceship called the Fortuna. It turns out Judy's biological father, Grant Kelly, was at the helm. It was a huge cliffhanger, in which the Robot and all the kids were stranded in an unknown part of space, while Maureen and John Robinson were in another. What's more, the origin of the alien Robots is still totally unclear and must be addressed in Season 3.

Who is in the Lost In Space Season 3 cast?

The entire regular Lost in Space cast returned for Season 3. That includes:

Who wrote and produced Lost in Space Season 3?

Since 2018, Lost in Space has been written by Matt Sazama and Burk Sharpless. This was the case for Season 3 as well. Zack Estrin has been the showrunner since Season 1, and he returned for Season 3.

The show is partially produced by Kevin Burns and Jon Janashi, who have held production rights since 1998. The contemporary and critically acclaimed Lost In Space is actually the second attempt by Burns and Janashi to bring the franchise back as a TV show. They also produced the 2004 pilot The Robinsons: Lost in Space, which was directed by John Woo and starred future Star Trek: Discovery star Jayne Brook. The Robinsons was never aired, and Lost in Space was shelved until 2017.

The producers of the new series consider it to be a return to the more serious tone present in the first season of the classic show.

Was Season 3 the last season of Lost in Space?

Yes. Netflix’s Lost in Space ended with Season 3. This is straight from showrunner/producer Zack Estrin, who said in March 2020:

"From the beginning, we’ve always viewed this particular story of The Robinsons as a trilogy...A three-part epic family adventure with a clear beginning, middle, and end."

What is the plot of Lost in Space Season 3?

Naturally, Season 3 picks up on all the loose threads Season 2 left dangling. There’s the immediate matter of the Fortuna and the discovery of Grant Kelly, Judy’s biological father. But the ill fate of his ship contains some key intel into one significant part of the series: The alien robot antagonists. The series ends in a battle for the ages, led by a resurrected second alien robot (SAR).

All of Lost in Space is now streaming on Netflix.