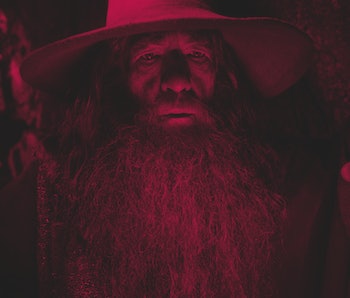 Why did Gandalf help the dwarves in The Hobbit? While the answer may seem simple (he wanted to help them reclaim their home), there’s actually a reason to believe that there may have been more to the story. In fact, one popular Lord of the Rings theory argues that Gandalf had his own reasons for helping the Dwarves, and it all has to do with the dragon, Smaug.

The Theory — Many Lord of the Rings fans believe that one of the key reasons Gandalf agreed to help Thorin and the other Dwarves on their quest to destroy Smaug was because he wanted to make sure the dragon was gone before Sauron began his next bid to take over Middle-earth. The theory argues that Gandalf knew Smaug would make a powerful ally for Sauron and that the dragon’s involvement in the War of the Ring would likely spell disaster for those who took up the fight against Sauron.

Therefore, Gandalf intended all along to rob Sauron of Smaug’s help, who could have made things even more difficult during the Lord of the Rings trilogy.

Gandalf’s Smaug Plan — Unlike most fan theories, there’s plenty of evidence to suggest that this Lord of the Rings take is actually correct. J.R.R. Tolkien himself even hinted that Gandalf’s motivations in The Hobbit involved preventing Smaug from becoming one of Sauron’s allies during the War of the Ring.

A story in Appendix A of The Lord of the Rings briefly mentions Gandalf’s fear of how Sauron might use Smaug’s power to help him take over Middle-earth and one of Tolkien’s Unfinished Tales went into greater depth about Gandalf’s desire to destroy Smaug. Tolkien’s writings aren’t the only pieces of Lord of the Rings media that addressed Gandalf’s concerns about Smaug and Sauron during the time of The Hobbit either.

The Inverse Analysis — This theory just makes Gandalf even wiser than we already knew he was, which we honestly didn’t think was possible. It means that the character, in addition to all of his other accomplishments throughout the Lord of the Rings series, was pulling off some truly monumental strategic plays against Sauron years before the Dark Lord had even declared his return. A wise wizard, indeed.

More like this
Entertainment
Jan. 30, 2023
New House of the Dragon “making-of” book plunges into the fantasy hit’s creation
By Jeff Spry
Entertainment
Jan. 27, 2023
Onyx the Fortuitous and the Talisman of Souls is a cringe comedy as overlong as its title
By Andy Crump
Entertainment
Jan. 31, 2023
Dune 2 Will Be Hilarious, Says Actor Whose Character Killed His Own Dad
By Ryan Britt
LEARN SOMETHING NEW EVERY DAY.
Related Tags
Share: