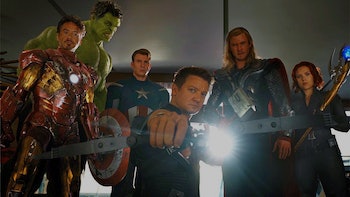 The Marvel Cinematic Universe is due for a shake-up, and who better than the God of Mischief to do it? In Episode 1, Loki redefines complex concepts like the Multiverse and the Infinity Stones in ways we never thought possible, but the show’s biggest retcon is so subtle you probably didn’t even notice it.

Warning! Spoilers ahead for Loki Episode 1.

The theory — In Loki’s first episode, Time Variance Authority agent Mobius (Owen Wilson) interrogates the Asgardian villain by showing him recordings from his own life out of his official TVA file. This version of Loki (plucked out of 2012’s The Avengers) is forced to rewatch the events of that movie and what happens afterward in Thor: The Dark World.

Loki later watches through the end of his file, which culminates in Thanos killing him in Avengers: Infinity War. In other words, this version of Loki is seeing a future he’ll likely never experience, but that’s actually not the weirdest part of this scene.

Take a second to think about the recordings that Mobius shows Loki. Do they look familiar? Of course they do because they’re actually just scenes from old Marvel movies.

The real-world reason for this is obvious: Marvel might have a big budget, but it’s not big enough to reshoot entire scenes from old Avengers movies. But how can we explain this anomaly from within the world of the MCU?

There’s only one answer: every single Marvel movie so far is actually just a TVA file!

The Time Variance Authority isn’t just observing the timeline and wiping out abnormalities, it’s also recording everything that happens and packaging it together in neat little video files. Why? Maybe it’s just a way to pass the time in a world where time doesn’t really exist. Or maybe the Time Keepers have some sort of ulterior motive. To be honest, the why is less interesting than the simple possibility that the entire Marvel Cinematic Universe has a secret framing device.

The power of a framing device — Framing devices are popular for a reason. They give their stories depth and, more importantly, they force the viewer to question everything they see. Think about 300 and its unreliable narrator. Or Stand By Me, tinted with nostalgia by the author reflecting on his childhood. These framing devices give an extra layer to already incredible films.

Even Star Wars almost had a framing device. On the set of Episode III: Revenge of the Sith, George Lucas reportedly said that the entire Star Wars saga was actually being recounted by RD-D2 hundreds of years after it happened. (That didn’t make it into the movies, but imagine if it did.)

This Loki theory isn’t canon either, at least not yet, but it makes a lot of sense. And if it is true, it gives the entire MCU a very different perspective. Every Marvel movie so far has been presented as having no narrator at all, but it’s possible this entire cinematic universe could be carefully edited together by some superpowered bureaucracy. That means what we saw in The Avengers, Ant-Man, and all the rest might not be totally accurate.

And if that’s the case, then our understanding of the MCU is probably about to change again very soon. After all, the TVA probably won’t last long now that Loki is around.

Loki is streaming now on Disney+