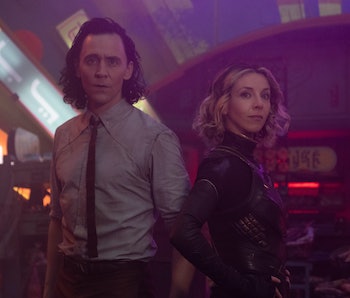 What madness lies in the multiverse? The Marvel Cinematic Universe is unraveling Phase 4’s plotlines thanks to the events of Spider-Man: No Way Home, Doctor Strange in the Multiverse of Madness, and the Disney+ series Loki.

Their stories may intertwine sooner than later, according to the head writer of two major Marvel projects.

What Happened? — In a May 13 interview with The Wrap, Michael Waldron discussed the potential connectivity between the movie he wrote, Doctor Strange in the Multiverse of Madness, and the series he also wrote, Loki. Based on Waldron’s comments, it seems as though the second season of Loki will take place during the events of Multiverse of Madness.

When The Wrap asked Waldron about writing the multiverse in the recent Doctor Strange sequel, he joked he was “the Loki guy, which helped.”

“I was like, okay, the very least I can make sure I’m not screwing over Loki,” Waldron said, alluding to how surprisingly separate Marvel’s varying productions are in terms of generating ideas. He added that his involvement in both the Doctor Strange sequel and the stand-alone Loki series is to “make these things congruous.”

He told The Wrap:

“Yeah, that’s the gift I can give myself is make these things congruous. It remains to be seen – how did the events of this movie play out through the lens of the TVA? What would they look like on a chronomonitor? I don’t know. We’ll have to find out.”

The Inverse Analysis — It’s important to note that Waldron isn’t set to return for the second season of Loki. So whatever Waldron says about Season 2 is likely more speculative than authoritative.

The MCU isn’t always connected, as the questionable canon of shows like Agents of S.H.I.E.L.D. can attest. But Phase 4 is shaping up to bridge the once-faraway realms of Marvel’s TV and movies, and Waldron’s comments indicate the possibility of even stronger connectivity in the MCU’s near future. Maybe Loki will view the collapse of the multiverse through a screen, just as audiences did in theaters this month.

What all that connectivity will actually mean in the long run remains unclear. Unlike past phases, which spent years building towards towards the climax of the Infinity Saga, Phase 4 has felt like a cluttered reset. There aren’t any immediate threats like Thanos, but that hasn’t stopped movies like Eternals and Shang-Chi and the Legend of the Ten Rings from seeding potentially huge conflicts that the MCU has yet to resolve.

While Loki by nature isn’t a show where Tom Hiddleston does the superhero thing and saves the day/world/multiverse (unless it’s in his own favor), the cataclysmic events of Marvel’s movies will at least be observed by Loki. And it will be interesting to know what kind of opportunity all this messiness will present to the God of Mischief.