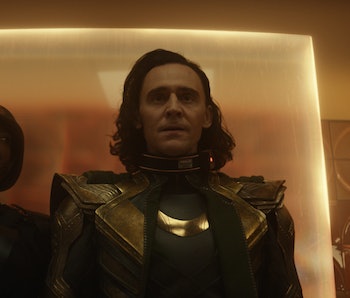 Not this again. As Marvel’s Loki premieres on Disney+, the ancient enemy known as “Mephisto fan theories” has returned with a vengeance. This time, fans believe a more potentially obvious reference to the iconic comic-book villain hints in the very first episode of Loki that the character, essentially the devil himself, is en route to the Marvel Cinematic Universe.

But what does Loki director Kate Herron have to say about the theory?

What Happened? — In the early minutes of Loki’s first episode, actor Owen Wilson makes his debut as Mobius, a mid-level employee of the TVA (Time Variance Authority) investigating a “Nexus event” — a more fancy word for “time crime scene” — in France, circa 1549.

Mobius makes contact with a child, who despite living in the 16th century has a pocket full of candy. When Mobius asks the child who gave them these anachronistic treats, the child points to a stained glass window of a sinister deity with horns. Mobius comforts the child, telling her, “Don’t worry, that devil’s afraid of us.”

Thus begins a pursuit of Loki — or at least one Loki, anyway. In order to bring in the trickster god, Mobius recruits the Loki we know and love, played by Tom Hiddleston, to poke his brain and figure out what a supposedly “superior” Loki variant is up to jumping around in various timelines. But the pilot’s obvious reference to the Christian devil has again fans buzzing about Mephisto, and whether the Marvel Universe’s “diet Satan” is the series’ villain.

Blame Spider-Man — In case you were spared from the Internet’s previous debate around this subject, Mephisto was heavily speculated by Marvel fans as making an appearance somewhere in WandaVision earlier this year. The true menace of Westview turned out to be Kathryn Hahn’s scene-stealing Agatha. But Agatha’s dark, witchy powers imbued WandaVision with sinister vibes that enabled speculation that the devil was behind it all.

But the speculation was unfounded beyond that. Marvel fans may have repeated this theory so much it started to become canon in their minds, but that doesn’t make it so. Coupled with the deeply opaque mystery-box nature of WandaVision, not to mention starving fans eager for more Marvel content after the studio took 2020 essentially off, fans ended up especially surprised by the ultimate reveal it had been Agatha Harkness all along.

A personal observation: Spider-Man: Far From Home, the last Marvel release in 2019 before the pandemic, ended with Spider-Man’s unmasking by the Daily Bugle. In the comics, Spider-Man undoes his unmasking by striking a deal with Mephisto, which comes at a high cost.

The MCU left its fans with that cliffhanger before the pandemic. Come WandaVision, fans picked up with the franchise still speculating about a Mephisto connection, especially given Wanda’s connections to Mephisto in the comics. This rumor persisted even once it was clear Mephisto would have nothing to do with Wanda’s story.

What does the Loki director say? — That brings us to Loki, which includes a more obvious reference to a Christian devil than WandaVision ever did. Conseqeuently, “Mephisto” started to trend on Twitter shortly after Loki premiered on Disney+. While some fans are simply mentioning Mephisto and seem to be aware he isn’t the villain in Loki, others are still vocally wondering whether Mephisto is heading toward an MCU debut.

But those fan theorists can chill. Director Kate Herron has shut down the possibility of Mephisto appearing as a villain in Loki, calling the whole confusion an unexpected coincidence and noting that the devil imagery in Loki’s first episode is just referencing Loki himself, a horned trickster who was cast out of heaven (or Asgard, as it’s known in the MCU).

“It’s honestly just a super weird coincidence,” Herron told Entertainment Tonight. “Like, it’s genuinely a reference to Loki — the horns, he was cast out of heaven, that’s what it’s a reference to ... I think WandaVision must have been in post when we filmed that. I did see all the stuff about that online and I was like, ‘Oh, this is going to be interesting.’”

Herron added, “It’s more relevant to the themes of our show, and it’s not a nod to that character,” meaning Mephisto.

The Inverse Analysis — We’re still quite a few months away from Black Widow opening in theaters, but it feels good to have a consistent output of Marvel series to speculate on and debate around — even if fans can’t stop asking the same questions, especially ones with already stated answers that aren’t hard to find.

Still, that just means the MCU is back in full force. Nature is healing.