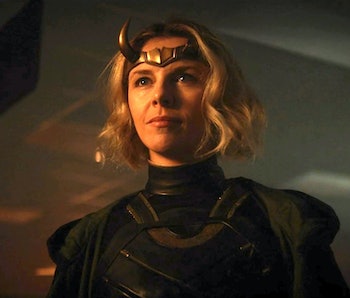 In the opening scene of Loki’s second episode on Disney+, a TVA grunt (played by Sasha Lane) is manipulated by a sorcerer to turn against her unit. At a Wisconsin renaissance faire in 1985, the TVA agent briefly goes rogue as Bonnie Tyler’s pop classic “Holding Out for a Hero” sets the tone for an act-one ass-kicking.

“Having some fun,” she says before passing out.

As the agent’s body is dragged away by a cloaked figure, Tyler belts out “I need a hero!” on the soundtrack, wielding the full might of her sonic powers, before the scene cuts to black.

As with any good Marvel show, one could simply enjoy the scene at face value — almost 40 years later, “Holding Out for a Hero” is still an epic banger — and not consider all that’s going on deep beneath the surface of Loki. While not as mystery-driven as WandaVision, Loki has already focused in on its central character’s efforts to defy his fate and reclaim a sense of chaos — a fascinating free-will-versus-determinism debate to be playing out amid Loki’s discovery of the TVA and its Sacred Timeline.

Tom Hiddleston’s Loki may not be the hero Bonnie Tyler wants, nor the hero anyone needs. To his core, Loki is simply not a hero. But the use of this song to open Episode 2 speaks volumes to where this series might be taking him.

Warning: Minor spoilers for Loki ahead.

“Where are all the Gods?”

Let’s get this first out of the way: Yes, there’s a lot of history to “Holding Out for a Hero.”

In 2018, a Twitter user went viral when they tweeted the following: “Shrek 2's ‘I Need A Hero’ is actually the greatest composition of all time.” Besides some errors with the statement — the song’s title is “Holding Out for a Hero,” and Tyler originally wrote and performed it for another generational classic, 1984’s Footloose — it was hard not to agree with the user’s enthusiasm.

With lyrics like “Isn’t there a white knight upon a fiery steed?” and “Late at night I toss and turn, and dream of what I need,” the song, originally performed by Tyler (and whose version is heard in Loki) bring sensuality back to Grimm-inspired fairy tale fantasies. A cover version by Jennifer Saunders added some pizzazz to Shrek 2, a PG-rated sequel that grossed a mighty $919 million at ye olde 2004 box office.

2004 was an ideal time for the song to experience a resurgence, given that it could appeal to both adults and children in equal measure. Adults could get a potent nostalgia hit, recalling their younger years taking dates to Footloose, while children were vulnerable to the pop paean’s vibrant energy, which masks its more suggestive lyrical content. (“He’s gotta be larger than life.”)

Kids who saw Shrek 2 during its release 17 years ago are adults now, which may explain why the song is coming back this year. It is heard not just in the newest episode of Loki but in the trailers for Netflix’s Masters of the Universe sequel and Marvel’s Guardians of the Galaxy video game (which used the song during a recent trailer at E3).

While the team behind Loki couldn’t have known they wouldn’t be the only ones relying on a Bonnie Tyler needle-drop, it’s fascinating to see this song choice add to an increasing new wave of appreciation for “Holding Out for a Hero,” however inadvertently.

What the song means for Loki

There are obvious reasons why “Holding Out for Hero” worked in recent trailers that toplined characters like He-Man and Star-Lord, whose storylines are defined by big swords and even bigger moments of heroism. But Loki? He’s not that kind of character. Loki, by contrast, is a lean rogue whose cunning wit and narcissism give him great power without the need for a magical hammer — or even an act of bravery.

But that’s why the song’s inclusion in Loki isn’t out of place. It’s actually perfect, given the when and where of the scene, because it suggests the “hero” of this series isn’t Loki at all — at least the version of him we’ve been following up to this point.

With its lyrics about a helpless damsel seeking a hero ringing out as the “variant” Loki played by Sophia Di Martino makes a grand entrance, “Holding Out for a Hero” can only mean one thing: Lady Loki is the real hero of this story.

Consider this: though the song is deployed as Lady Loki arrives on screen in a moment of apparent villainy, this could be read ironically. Later, when the mysterious character takes off the hood to reveal she is wearing Loki-esque horns, this newcomer — who might be Enchantress? — smirks in the way one might expect from a new adversary posing a daunting challenge to our underdog trickster.

But as Loki himself warns in the episode, “Expect the expected.” While the audience is following Loki down a path that could lead to his doom, this is still the same version of the trickster god who menaced Earth’s Mightiest Heroes in 2012’s The Avengers. We’re cheering on Hiddleston’s Loki, but he’s not the good guy in this story — and to forget that would be to fall into one of his nefarious traps and miss the real hero right in front of us.