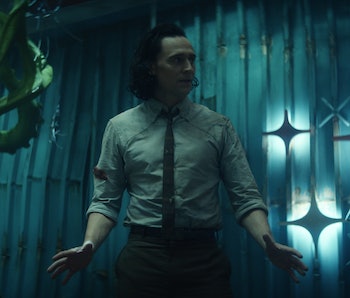 We’re nearing the final hour of Loki on Disney+. So, naturally, a giant, spooky castle was bound to make an appearance. Warning: Spoilers for Loki ahead.

In the penultimate episode of Loki, titled “Journey Into Mystery” in homage to one of Marvel’s earliest anthology comics (it debuted Thor in 1962), Tom Hiddleston and Sophia di Martino’s versions of Loki successfully enchant the cloud guardian Alioth to relinquish control of his protective barrier, revealing a mysterious castle off in the distance.

But who does the castle belong to? More importantly, who lives there now?

Naturally, Marvel fans are buzzing over the unknown keeper of the castle. Theories have run rampant, with at least two big ones hinting at the possible future of the Marvel Cinematic Universe. Let’s break down the two guesses fans have right now.

The Theory — It’s no secret that Marvel is working on a movie with the Fantastic Four. Announced last December, the new film will be directed by Jon Watts with a potential release date in 2023. (It is confirmed the movie will release after Guardians of the Galaxy Vol. 3, which is scheduled for May 5, 2023. Any time after that is essentially open for the Fantastic Four’s theatrical return.)

But despite this far-off release date, is Marvel already planting the seeds for Marvel’s “First Family” to return? One of the most infamous castle owners in Marvel history is none other than Victor von Doom, aka Doctor Doom. Like the supervillain he is, Doom resides in Castle Doom, which lies on a mountain outside the Latverian capital city of Doomstadt. Like all vaguely eastern European castles, Castle Doom is large, imposing, and quite sinister as it stretches upward and appears to pierce the sky.

The castle that Loki and Sylvie see in “Journey Into Mystery” has strikingly similar European architectural features. For this reason, fans are going haywire over the idea that Loki is already teasing Doctor Doom and the Fantastic Four, ahead of their inevitable arrival in the MCU.

Not so Fast — While it’s exciting to imagine a Fantastic Four teaser so soon, there’s good reason that won’t happen. Nothing in Loki has set up Doctor Doom or the Fantastic Four as being particularly relevant to Loki’s story. The series has done a spectacular job focusing only on Loki. This is his journey (into mystery). No one has mentioned Doctor Doom in the same breath as Loki, at least in this continuity. Why should Marvel start now, at the series’ denouement?

Narratively, it would make little sense to include Doctor Doom in a story that has nothing to do with him. Even if it were for a fun Easter egg, it should also be said Marvel isn’t usually one to do cheap, meaningless cameos. (Although “trolling” seems to be a good-enough reason for Marvel to undetake some narrative gambles, in the case of “Ralph Boehner.”)

In short, Doctor Doom would be fun. But his arrival would distract from Loki. And the last thing you want to do is steal the spotlight away from a trickster sorcerer.

The Theory — Another not-so-secret game afoot in the MCU is the imminent arrival of Kang the Conquerer, a major Marvel villain expected to appear in Ant-Man and the Wasp: Quantumania, which is set for release in February 2023. Lovecraft Country star Jonathan Majors will play Kang, who may pose as significant a threat as Thanos did throughout the Infinity Saga.

This lengthy Inverse primer explains Kang’s whole deal, but the peanut-sized summary is that he’s a time traveler known by many names. One such name in the distant future is Immortus. And yes, Immortus has a castle. Though said castle never had an official name in its very few comic book appearances, it has been called “Castle Limbo” due to its location in the otherworldly realm known as Limbo.

Crucially, Marvel’s Limbo is not the same concept as the limbo found in Catholicism, but rather its own magical dimension in the center of the Splinter Realms that connect to the Nexus of All Realities. With Kang having a more solid foothold in the MCU than Doctor Doom (as of this moment, at least), not to mention the intriguing Easter egg of Yellowjacket’s helmet from Ant-Man being found rotting in the Void, all signs point to Castle Limbo being the structure that Loki and Sylvie find themselves approaching.

Not for nothing: the narration text in one of Castle Limbo’s few comic appearances, in Thor #282, describes a parting of clouds and mist exactly as it does in Loki:

“But finally, the mists part, and his [Thor’s] immortal eyes widen in awe for the second time since he entered this enigmatic realm.”

Not so Fast — While that could very well be Castle Limbo in Loki, it’s unknown whether Jonathan Majors will play Kang the Conqueror before his cinematic appearance in the third Ant-Man in 2023.

The math checks out. Shooting for Loki took place throughout 2020, beginning in January and wrapping in December (with a significant break in between due to the Covid-19 pandemic). Majors’ casting as Kang was reported in mid-September. So it’s possible Majors was invited to shoot a scene or two for Loki as Kang. But whether that actually happened is unknown.

But who’s really inside the castle?

The Inverse Analysis — In true Loki fashion, Loki and Sylvie may be in neither Castle Doom or Castle Limbo, but actually Castle Loki, a roost occupied by another variant so reclusive and so brooding that he lives in a Gothic castle by himself. (Don’t tell me that wouldn’t be a Loki thing to do.) Certainly this would make more sense than teasing new villains for Marvel movies that have nothing to do with Loki.

Loki will stream its final episode Wednesday, July 14 on Disney+.