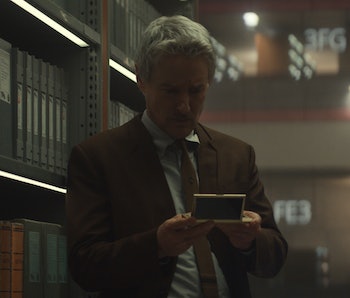 Vampires aren’t exclusive to the Marvel Cinematic Universe. But when vampires are mentioned in that universe, you’ve got to wonder if a certain Daywalker is somewhere close.

In the newest episode of Loki on Disney+, a passing mention of vampires by Mobius (Owen Wilson) is enough to inspire a question Marvel fans have wondered since at least 2019: Is the MCU finally setting up the pieces for its Blade reboot?

In “The Nexus Event,” the fourth episode of Marvel’s Loki on Disney+, Mobius casually mentions some of the bipedal species that have walked through the TVA. “You know, we brought in Kree, Titans, vampires. Why is it the two orphan demigods are such a pain in the ass?”

Kree and Titans are unique to the MCU. We’ve seen Kree in Guardians of the Galaxy and Captain Marvel, and the big bad Thanos was a Titan. But vampires? Those go beyond Marvel. The blood-sucking creatures of the night are found in everything from folklore and gothic literature to True Blood. Vampires also have a deep history in Marvel Comics. In addition to superheroes, one of Marvel’s most popular comic genres was horror.

In 1971, after the Comics Code Authority eased many of its puritanical restrictions (including an explicit ban on vampires), Marvel pursued a true vampire comic book series using Bram Stoker’s Dracula, both because of Dracula’s enduring presence and because he was public domain. (In other words, no licensing fees.)

The name of the book was The Tomb of Dracula. Created by industry legends Marv Wolfman and Gene Colan, it was in the series’ tenth issue in 1973 that Blade, an ultra-cool vampire hunter, made his first appearance.

In the 1990s, the most popular Marvel characters were X-Men and Spider-Man. However, through the efforts of actor Wesley Snipes, a lifelong Marvel fan who first wanted to produce and star in a Black Panther movie, the actor starred in the live-action Blade in 1998. Two years later came X-Men. Though made independently, the box office success of both films were the one-two punch that kicked off Hollywood’s still-ongoing obsession with adapting comic books.

Fast forward to 2019 at San Diego Comic-Con, Kevin Feige and Oscar-winning actor Mahershala Ali announced a reboot of Blade, set in the canon of the Marvel Cinematic Universe. While details surrounding the film still remain unknown, it’s not uncharacteristic of Marvel to start planting seeds for future projects. This includes the passing mention of vampires in Loki, which on its own means nothing until you know what awaits us in the future of the MCU.

Vampires in the MCU

Importantly, Loki is not the first time anyone has mentioned vampires in the MCU. In 2017’s Thor: Ragnarok, Korg advised Thor on the uselessness of a fork as a weapon in the gladiatorial Contest of Champions, “unless you’re fighting off three vampires that are huddled together.”

More recently in WandaVision, brothers Tommy and Billy likened their sleeping uncle Pietro to a vampire. (This, of course, caused Pietro to wake up and scare them.)

But the difference with Loki is that we know Blade will soon star in a new movie. (Thor: Ragnarok was released nearly two years before Marvel announced the reboot.) In WandaVision, Tommy and Billy only referenced vampires as kids typically would. As manifestations of Wanda’s grief, they definitely never had a personal encounter with vampires like Mobius.

So, vampires exist, which can only mean Blade exists. And just because Loki doesn’t reveal Blade, a half-vampire impervious to sunlight — a “Daywalker” — that doesn’t mean he’s not lurking in the shadows, waiting for the right time to strike.