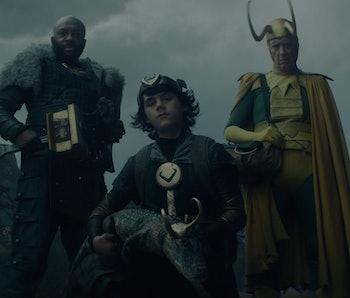 It’s been two long years since Kevin Feige shouted the word “Mutants” onstage at San Diego Comic-Con 2019. Since then, there’s been no official mention of the X-Men or any other members of the Homo Superior species. But is it possible that Loki already set the stage for a powerful new mutant to join the Marvel Cinematic Universe?

If you think about what we’ve already seen in Marvel’s Phase 4 (namely, WandaVision and Loki) and what’s coming next (Doctor Strange in the Multiverse of Madness) it looks pretty likely that the MCU is setting up a powerful first X-Men’s debut: the Scarlet Witch.

No, I’m not talking about the Wanda Maximoff we already know and love. I’m talking about a totally different character. Confused? Let’s dive in.

The Scarlet Witch is a mutant in the comics, but in the Marvel Cinematic Universe, she’s apparently a witch. Even after WandaVision hinted that she had latent powers before being exposed to the Mind Stone, the show still refused to go as far as using the “M” word.

But Loki reveals how Marvel can still use Wanda Maximoff to give the MCU its first true mutant: variants

Back in February 2021, when Evan Peters first appeared on WandaVision, we were all convinced he was actually Pietro from another dimension. This turned out to be a vicious misdirect — I’m still a little mad about Ralph Bohner — but the basic concept could carry over into Marvel’s future. After all, thanks to Loki, we know that the multiverse is real and variants like Evan Peter’s Pietro are actually possible.

Doctor Strange in the Multiverse of Mutants

What if Doctor Strange in the Multiverse of Madness doesn’t just feature one version of Wanda, but two? This actually seems like a pretty reasonable prediction based on Loki, but the implications are huge. If we meet another version of Wanda, what’s to stop that variant from being an actual mutant and a member of the X-Men?

Introducing a second version of the Scarlet Witch with legitimate mutant powers could raise the stakes tremendously in the Doctor Strange sequel. Not only does it allow Wanda to serve as both the hero and villain of the movie, but it also uses a character we’re already familiar with to set up an entire new universe of superheroes and villains.

Once the mutant version of Wanda Maximoff is established, her father Magneto can’t be far behind. Neither can the rest of the X-Men and all the other characters that come with them.

If this theory is right, Marvel may want to rename its Doctor Strange sequel. In the Multiverse of Mutants suddenly makes a lot more sense.

Doctor Strange in the Multiverse of Madness is set to premiere on March 25, 2022.