“Don’t be what they made you.” 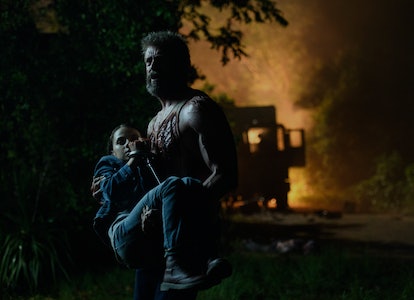 Every genre has its tropes. You’ll be hard-pressed to find a noir that doesn’t have a single fedora or cigarette, or a Western that doesn’t have cowboy hats and gunfights. Likewise, there aren’t many modern superhero movies that don’t show exploding buildings and oversized CGI spectacles. Violence and action are as integral to superhero stories as shadows and corruption are to noir.

Viewers and critics have spent years discussing how repetitive and numbing the superhero genre’s reliance on climatic CGI battles can be, but not many creators have tried to make a comic book movie about the genre’s fetishization of destruction. That’s what makes Logan unique.

Directed by James Mangold, Logan doesn’t just function as a farewell piece to Hugh Jackman’s Wolverine, but as a meditation on the superhero genre itself. The film’s script, which was co-written by Mangold, Michael Green, and Scott Frank, dares to show what too much violence and conflict can do to a man. The result is a film that not only acts as a commentary on the highs and lows of superhero stories, but also makes death real in a genre that refuses to let its characters die.

At the start of Logan nearly all the X-Men are dead, Wolverine is dying, and Professor X (Patrick Stewart) is suffering from dementia. Both men are old and waiting for the end.

What neither realizes is that a corporation called Alkali-Transigen has secretly created a new generation of heroes to replace the old by using mutant DNA to imbue children with superpowers. When Logan agrees to transport Laura (Dafne Keen) to a sanctuary inhabited by her fellow Transigen escapees, he’s forced to step back into the fray one last time.

In doing so Logan finds himself face-to-face with a bloodthirsty corporation, as well as a cloned copy of himself in the vicious X-24 (also played by Jackman). Unlike Laura, who has Logan’s powers but also her own personality and emotions, X-24 is Logan at his most superficial: A killing machine who does whatever his corporate creators tell him to do.

The superhero genre has always had a problem with death. The ongoing, never-ending nature of comic books means that characters aren’t allowed to ever truly die. From a business standpoint, that makes sense. But on a narrative level, the lack of resolution brings an air of cynicism to most long-running superhero stories. Are these characters meant to do nothing but fight and suffer?

Many of the movies and TV shows inspired by comics have, for better or worse, adopted a similar mentality. Despite spanning nearly 30 films and a growing number of TV shows the Marvel Cinematic Universe has killed surprisingly few heroes, many of whom have somehow been brought back after their “deaths.”

That fact is something Logan grapples with from start to finish. The film exists in a genre overseen by companies that demand their franchises keep going at all costs, so it only feels fitting that Logan forces its hero to battle a greedy corporation hellbent on keeping superheroes alive and profitable. Similarly, at a time when superheroes have never been more at risk of being flattened into violent, two-dimensional figures, there’s no better villain for Logan to face than an emotionless, physically perfect version of himself.

But Logan doesn’t fight Transigen and X-24 for his own sake; he does it for Laura and the other children Transigen abused. That detail allows Logan to become both an investigation of the comic book genre and a deconstruction of the superhero itself.

The film makes Logan not a perfect superhero in a snazzy costume, but a dying, increasingly frail figure whose skin is covered in scars and wrinkles. And his victory at the end of the film doesn’t come from killing X-24 or his corporate overlords, but from saving Laura and her friends. His peace comes not from knowing that his enemies are dead, but that those he wanted to save will be safe after he’s gone.

Unlike Avengers: Endgame, which is more concerned with bringing the overarching plot of the MCU to a close than saying anything about the genre, Logan isn’t interested in its hero “winning” a climactic fight or contributing to some all-consuming lore. Wolverine gives his life to save a generation of children just like him and dies quietly in a forest. As a result, the film proves that the best heroes aren’t the ones who fight to win, but to make sure that those who come after them don’t have to fight at all.

Before Logan came out, a lot of attention was given to the film’s R rating. The consensus seemed to be that Logan was going to give comic book fans what they’d always wanted: A violent movie that shows Wolverine actually sinking his claws into heads and slicing off limbs. Logan delivers on all of that, but it isn’t just violent for the sake of it.

On the second page of the script, Green, Frank, and Mangold make their intentions clear. Just before the film’s opening limousine fight kicks into high gear, the writers speak directly to the script’s reader. “Now might be a good time to talk about ‘fights’ described in the next 100 or so pages,” the script notes. “Basically, if you’re on the make for a hyper choreographed, gravity defying, city-block destroying, CG f***athon, this ain’t your movie.” The script goes on to promise that “should anyone in our story have the misfortune to fall off a roof or out a window, they won’t bounce. They will die.”

It’s a mission statement that Logan delivers on. The film makes the violence of the superhero genre bloody and real, showing you what it might actually look like if the ending of a Marvel movie weren’t artificially bloodless. By the time Logan’s final setpiece is winding down, it’s hard not to feel exhausted and horrified by the endless nature of the film’s violence. But that’s the point. We’re meant to feel that way because Logan does.

Logan is a character study about a superhero on his last legs, and in constant pain because of the very thing that makes him indestructible. Mangold and Jackman confront the most familiar beats of every superhero movie and show what experiencing them too many times can do to someone. And then Logan ends with not just the death of an era, but the start of one free of the same pain and violence that so often defines the superhero genre.

It’s a future where, per Logan’s final request to Laura, a superhero’s story doesn’t have to be like those that came before it. Instead, it can be something new. Something better.

More like this
Entertainment
5.10.2022 12:15 PM
47 years ago, Marvel turned its biggest failure into an unstoppable juggernaut
By Richard Newby
Culture
5.11.2022 12:00 PM
You need to watch the most unique time-travel epic ASAP
By Eric Francisco
Entertainment
5.17.2022 10:00 AM
Ant-Man 3 leak reveals what makes Kang a bigger threat than Thanos
By Alex Welch
Related Tags
Share: