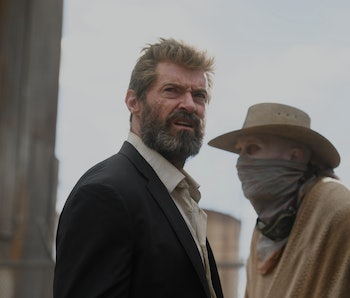 In James Mangold’s Logan, Hugh Jackman takes one final turn in the role he inhabited for nearly 20 years: Wolverine, the berserk mutant who can heal from any injury and pop claws from his fists. In the new movie, set in 2029, Wolverine’s days with the X-Men are far behind him. He drives a limo and goes by James, suffering quietly as the adamantium alloy that gave him strength now slowly poisons his body. To create the dying hero, Logan director James Mangold looked to Oscar-winning makeup artist Joel Harlow and his FX studio Morphology.

The first order of business, Harlow says, was to “unlearn” everything he’s done from working on polished blockbusters like The Lone Ranger and Star Trek Beyond. “This [movie] is unlike anything that came before,” Harlow told Inverse, noting that Logan was not standard superhero fare. “If Logan didn’t have blades coming out of his hands, this wouldn’t be a superhero movie. It would be a drama.”

Though the basis for Logan was the 2008 graphic novel Old Man Logan from Mark Millar, no one really referred to them during the making of the film, even for visual reference. Rather, director James Mangold, Harlow says, “had a very clear vision of the film he wanted to make” on his own. “He didn’t want the makeup to overpower the performance, but work with it.” In short, “You give [Wolverine] weathering.”

Logan isn’t the first time Harlow has worked on the franchise. For the original X-Men that was directed Bryan Singer back in 2000, Harlow crafted footprints left by Senator Kelly after he had been transformed into a mutant by Magneto. But that was a week’s worth of work, for which Harlow wasn’t given formal credit. Transforming Hugh Jackman “into sort of this old, scarred version” of Wolverine, that was far more involved. It took discipline to not exaggerate Wolverine’s weathered features. “You still wanna make him look rugged and handsome but you wanna give him character,” says Harlow.

To that end, he gave Jackman bloodshot lenses for when Logan is hungover or when the adamantium poison is especially toxic. Harlow’s team also covered Jackman with a variety of scars for his face and body. “Over the years he’s stopped healing,” he explained. “He’s retained some damage from the last time we saw him to this movie. His system is shutting down.”

The scars were especially important. Although the timeline continuity of the X-Men movies are — to put it mildly — jumbled, Harlow believes Logan’s scars paint a picture of where and what he’s been through since the action in 2014’s Days of Future Past.

“People suffer injuries and they acquire scars. That’s a fact of life,” he said. So every scar on Jackman’s body in Logan, from gunshot and shrapnel wounds to cuts and bruises, “told its own story just by the nature and shape of it.” “No two scars are the same, just like a snowflake,” he added. “You want to populate him and the surface of his body with a story, a road map of where he’s been.”

Jackman’s Wolverine wasn’t the only mutant in Logan to undergo a substantial degeneration. Charles Xavier, played by Patrick Stewart in his own curtain call, was a powerful telepath and father figure to all mutants. But in Logan, he’s an nonagenarian unable to even pee on his own. His mutant powers have also weakened and become unstable, causing devastating seizures that paralyze anyone within his vicinity. Like Wolverine, Xavier too is “breaking down” and suffering from dementia.

To illustrate Xavier’s health, Harlow glued whispery, shaggy strands of hair onto Stewart’s head, ears, and eyebrows, because Xavier is “fighting a losing battle.” And, “I think James [Mangold] said it on set, that’s why his hair doesn’t grow. His abilities are so strong it prohibits the follicles from growing hair. I wanted to add those things [because] as you get older, you have to keep up, otherwise, they take over.” Besides the hair and wrinkles, Harlow added liver spots and a cataract in his eye “because his eyes are going as well.” In essence, Harlow wanted Xavier to be “a shadow of his former self.”

Logan accidentally shared a mutant with the main X-Men films: Caliban, an albino who can pinpoint other mutants like a living GPS. Played by Stephen Merchant in Logan, he’s a different personality than the Caliban from last summer’s X-Men: Apocalypse, as played by Tómas Lemarquis. The two filmmaking teams didn’t discuss the character, resulting in different interpretations. Not that it matters, because Harlow — who shaved Merchant’s head, gave him contact lenses, and airbrushed him to appear “very pale and sickly looking” — says the dramatically different tone of Logan would lead to a dramatically different Caliban. “[He’s] not vibrant or energetic like the Caliban in Apocalypse,” Harlow said. “All these characters are suffering. They’re all suffering together and they’re reaching their end.”

“Suffering” was the ethos in designing the characters of Logan, to “desaturate” personalities that audiences have only known to be colorful. “They’re holding onto this last little bit, and because they’re near the end, you want to mute them.”

Truly, Logan is a different superhero movie than anyone might expect. With a rare R-rating, the film allowed Harlow to go mad like never before. He embraced the chaos, and allowed his team to get graphic. “I hadn’t worked in a film that was R-rated for brutal violence in a long time, if ever,” he said. “It took me that first battle we shot, which was Laura being confronted by the Reavers, to dispense with all of [those feelings]. You don’t have to hold back. In fact, the farther you go the better.”

Still, Harlow exercised restraint where necessary, which made all the difference. In comparison to his last film Star Trek Beyond, which earned him an Oscar nomination, Logan was about keeping disciplined. Like painting, “If you overpaint a scar, it’s made up. It’s pulling back that was another learning curve.” Films like Star Trek Beyond compelled Harlow to push the envelope, but Logan taught him to pull back. “Sometimes the subtle stuff, subtle scars, tell more than a grand spectacle,” he said.