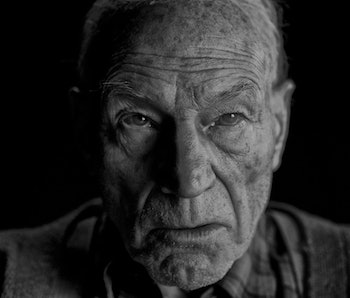 If you’ve seen Professor X in the trailers for Logan, you might have noticed he has some newly grown hair to go with his salty disposition. It turns out this isn’t because Patrick Stewart wanted to go for a new look, but it, in fact, reveals just how weak Professor X has become since the first X-Men movie.

In an interview with Empire, Logan director James Mangold pointed how Professor X’s slight hair explaining, that “You may have noticed he has some hair on his head which could be sacrilege. But the theory is that he lost all his hair because it’s just too damn busy up there to grow hair.” In the comics, it was revealed that Charles Xavier loses all of his hair by the time he finishes high school as a side effect of his immense telepathic powers. “Then the idea for me was ‘Well maybe a little fringe is growing now, that things are slowing down mentally.’’’

It’s interesting to note, however, that in the X-Men Cinematic Universe, audiences saw exactly when Charles Xavier (played here by James McAvoy) became bald in X-Men: Apocalypse. In that film, the mutant Apocalypse decided to used Xavier as his new human body, and Charles loses his hair as a result of the attempted body takeover.

That diverges a little from the comics where Xavier was pretty much bald, to begin with. Either way, in both situations he loses his hair because of immense mutant powers, and to see Mangold acknowledge the Professor’s weakening mental state through the use of his hair is a really cool bit of detail that’s not immediately noticeable but becomes a cool bit of character lore when revealed.

Hopefully, Logan will continue to play with the X-Men universe by adding little creative flourishes like Professor X’s hair, or the in-universe comic books Laura reads.