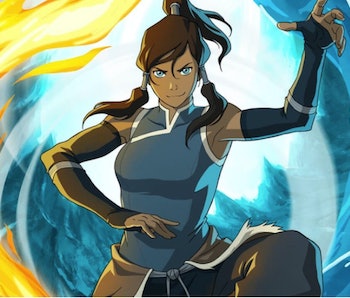 Three months after Avatar: The Last Airbender landed on Netflix, The Legend of Korra arrived on the streaming service on August 14. That means some fans have been able to revisit Korra for the first time since the series finale aired in 2014. Others are discovering the sequel series for the very first time. You’ve probably noticed that a handful of characters from Legend of Korra look similar to those from The Last Airbender and a convincing fan theory may explain why.

The Legend of Korra is set 70 years after the events of The Last Airbender, following the titular character as she takes over the role of Avatar after Aang’s death. In the vein of the original series, Korra is able to employ the use of the Avatar cycle to connect with her past lives. She’s able to speak with numerous Avatars who came before her. That includes Kyoshi and Kuruk, who both guide Korra after she loses her memory.

Korra bears a striking resemblance to Katara, Avatar Aang’s wife and a powerful waterbender in her own right. Aang himself shares facial similarities to his predecessor Avatar Roku’s wife. However, there may be more to the resemblance than mere happenstance.

The Instagram account zuko._uwu posted screenshots of a tweet about that resemblance between Korra and Katara, but also included Kyoshi’s resemblance to Kuruk’s wife, Roku’s resemblance to Kyoshi’s girlfriend, and Aang’s resemblance to Roku’s wife in side-by-side images. The idea behind this is a so-called "Japanese myth" — which seems to be a modern meme rather than ancient folklore — which claims “you have the face of the person you most loved in your past life.” Old or new, it's a beautiful idea. Take a look below.

This is an incredibly moving way to look at the artistic choices behind the characters of both Avatar: The Last Airbender and The Legend of Korra. It truly bridges the gap between the two shows, connecting them in more visceral and profound ways. The idea that Korra looks like Katara not only harkens back to the original series, but could explain why the two share similarities outside of being members of the Southern Water Tribe.

In the case of Aang and the other avatars, it stands to reason that the avatars loved their significant others so fiercely during their lifetime that this manifested in facial similarities in the avatars that followed. After all, the avatar cycle implies that every avatar is spiritually connected to each of their past incarnations. The theory merely adds a physical connection as well, offering some thoughtful context to the world of both shows.

The Inverse Analysis — The idea behind the post is incredibly sweet. However, there doesn’t seem to be an actual Japanese myth that matches this idea. The saying seems to have emerged on Twitter a couple of years ago, going viral before popping up across a myriad of accounts and has seemingly been recycled by many ever since. That said, it definitely fits into the mythology of The Last Airbender and Legend of Korra quite nicely and adds an additional layer to the rich and complex world of the show.

Avatar: The Last Airbender and The Legend of Korra are now streaming on Netflix.