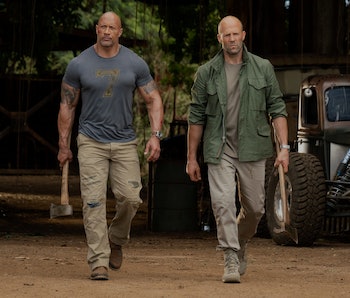 Give how big these movies have become, it bears a reminder: The Fast and the Furious, released in 2001, was an action-crime drama about an undercover cop infiltrating a gang of street racers scheming to steal DVD players. That was it. It was kids in tricked-out Hondas risking jail time over electronics that would be obsolete by the end of Bush’s term.

Nearly two decades later and you can see some of those very same characters stopping drug lords, cyber terrorists, nuclear bombs, and blasting off to space. It’s silly and ridiculous, but after 20 years these movies earn the right to escalate things.

Evidence of that escalation is no more apparent than in the series’ first spin-off, 2019’s Hobbs & Shaw. Starring two of the series’ breakout characters Hobbs (Dwayne Johnson, who debuted in 2011’s Fast Five) and Shaw (Jason Statham, whose first appearance was a post-credits cameo in 2013’s Fast & Furious 6), Hobbs & Shaw is also the franchise’s first science-fiction movie in its inclusion of a superhuman antagonist and a plot MacGuffin that takes the form of a dangerous bio-weapon.

And Hobbs & Shaw is the movie you need to watch before it leaves HBO Max on June 13.

While it’s set after 2017’s The Fate of the Furious, Hobbs & Shaw functions on its own. Adversaries Luke Hobbs (Johnson), a DSS agent, and Deckard Shaw (Statham), a mercenary, are forced to work together to stop a medically enhanced superhuman, Brixton Lore (Idris Elba), who works as a puppet for an even more powerful organization called Eteon. The two team up with Shaw’s sister, Hattie (Vanessa Kirby), who is somehow at the center of everything.

Hobbs & Shaw is a paradox of a movie, existing as both a Fast & Furious installment and something else entirely. Its predominant theme is still the franchise’s favorite “F” word, family, as Hobbs and Shaw turn into reluctant brothers who rely on each other despite their egos. And both Hobbs and Shaw get invested in stopping Brixton to protect their flesh and blood. The climax set in American Samoa (filmed in Kaua’i in Hawaii), where Hobbs leads a haka, is a thrilling expression of Māori spiritualism that is steeped in heritage, identity, and yes, family. Extra neat: Johnson’s real blood cousin, professional wrestler Roman Reigns, gets a cameo in this scene, evidence that Johnson doesn’t just performing for an audience but tries to live up to the story’s message in his own way.

But Hobbs & Shaw, when it was released in the summer of 2019, was the franchise’s next big leap into territory it hadn’t before, which consequently gives it an identity all to its own.

True, Hobbs & Shaw was riding the momentum Fast & Furious was set. The antagonist of The Fate of The Furious, Cipher played by Charlize Theron, was/is a super hacker whose sufficiently advanced skills behind a keyboard are indistinguishable from magic. That was a step forward from Furious 7, where Statham’s Shaw was a vindictive badass crossed with a slasher movie villain. He in turn was another step from Fast & Furious 6, the first time the Fast movies resembled an international spy flick. Hobbs & Shaw is only part of a natural evolution that was taking place over many years, not overnight.

Hobbs & Shaw doesn’t qualify as a “good” movie even in summer blockbuster terms. Don’t get it twisted: It’s a lot of fun and it’s very funny, all thanks to the insane charisma of Johnson, a remarkably skilled deadpan actor in Kirby, Statham just generally nailing his timing, and the inclusion of Ryan Reynolds and Rob Delaney in supporting roles that just feels like cheating.

But Hobbs & Shaw’s confused strokes, caught between action that ought to feel dangerous and buff men who survive them, keeps Hobbs & Shaw from achieving greatness. It is maybe too big of a picture for director David Leitch, a craftsman who excels best with intimately-scaled action (like 2014’s John Wick and 2017’s Atomic Blonde) than comic book insanity. Brixton proudly calls himself “Black Superman,” but no one else feels human enough either.

When I reviewed Hobbs & Shaw rather negatively two years ago, I was fatigued at thinking where Fast & Furious was headed. Hobbs & Shaw was a leap from the franchise’s already significant growth into James Bond-esque plots and villains, but the recent F9, which isn’t a spoiler to say it ends in outer space, now makes Hobbs & Shaw look harmless and quaint. Turns out, it didn’t have to be a good movie. It just had to be a good time.

Hobbs & Shaw is streaming now on HBO Max until it leaves on June 13.