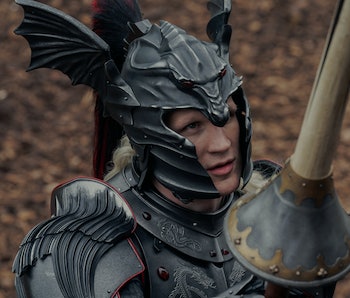 Prince Daemon Targaryen, the spoiled, arrogant younger brother of King Viserys I Targaryen, has many lovers during the peak and flame-out of his House’s dynasty. He also has a couple of wives to contend with in the midst of several affairs.

One of these wives, Lady Rhea Royce, head of House Royce and the heir to Runestone in the Vale of Arryn, is mentioned briefly in the first episode of HBO’s GoT prequel series, House of the Dragon.

What is her relationship with Daemon (portrayed by Matt Smith in HOTD) like? Will we see her on the show? The source material, A Song of Ice & Fire prequel novellas and novelettes penned by George R.R. Martin, may hold the answer...

Rhea Royce, Daemon Targaryen’s first wife, is rumored to be portrayed in House of the Dragon by Rachel Redford. Redford is playing Fruszi in the second forthcoming season of Netflix’s Shadow and Bone. So far, we have not seen her yet on the Game of Thrones spinoff show.

Rhea Royce marries Prince Daemon Targaryen in 97 AC, more than a decade before the main events of the HOTD premiere, which are set in 112 AC. The marriage is politically advantageous for House Targaryen, as Rhea is the heir to Runestone.

Runestone is located in the Vale of Arryn, a fertile valley bordered by the Mountains of the Moon in eastern Westeros that has long been a coveted strategic stronghold in wartime (including during the events of Game of Thrones). The Vale includes The Eyrie, the seat of House Arryn; the Bloody Gate; the Ironoaks; the Baelish keep; the Heart’s Home; Castle Redfort; and Castle Runestone, the seat of House Royce.

Though the marriage between Rhea and Daemon is a prudent match, the marriage is not a happy one. There are hints throughout Martin’s writings that Rhea is a lesbian, and her lack of desire for Daemon leads to no children from the union. Daemon has no affection or love toward Rhea, and despises the inhospitable mountains of the Vale of Arryn. He often calls her his “bronze bitch” to her face — a jab at her looks, her personality, and her House. They are estranged soon after their wedding, and remain so until the end of Rhea’s life.

When King Viserys I Targaryen (Paddy Considine) ascends the throne, Daemon pleads that he be allowed to nullify his marriage to Rhea, but Viserys rejects his request. Instead, he allows Daemon to serve on the small council as the Commander of the City Watch and a Master of both Coins and Laws.

Daemon’s relationship with Rhea sours further when Daemon’s affair with Lady Mysaria (Sonoya Mizuno) leads to a pregnancy. Adding insult to injury, Daemon attempts to steal a dragon egg from the Dragonpit in King’s Landing for his unborn child. Furious, Viserys punishes Daemon by sending him into exile at Runestone, and therefore back to his wife.

Daemon soon finds an excuse to flee Rhea and the Vale. By 106 AC, he is attempting to conquer the Stepstones with the Sea Snake, Lord Corlys Velaryon (Steve Toussaint). After his success overseas, Daemon returns to King’s Landing and asks his brother again to please let him nullify his marriage to Rhea, asking for the hand of his niece and Viserys’ daughter, Princess Rhaenyra Targaryen (Milly Alcock/Emma D’Arcy). The king, outraged, exiles Daemon once more. This all goes down before the start of House of the Dragon’s main action. The following contains spoilers for upcoming events of House of the Dragon Season 1.

Rhea dies in 115 AC, the culmination of a nearly 20-year-long unhappy relationship with Daemon. She dies of natural causes— hawking in the Vale, falling from her horse, and breaking her head. After Rhea’s demise, Daemon almost immediately demands that all lands, castles, and incomes of House Royce — which would give him a big chunk of property and power in the Vale — be handed-down to him as the widower of Rhea. The Arryns however, not only deny Daemon’s claim, but Daemon is exiled from the Vale and asked to never return.

The Inverse Analysis— Rhea’s role in Daemon’s life is relatively small, given how antagonistic their relationship is and how alienated they are from one another — both physically and emotionally.

We may see Rhea in flashbacks or in brief moments post-exile(s) with Daemon, but it is most likely that the show will focus on how Daemon destroys any chance the Targaryens have of seizing control of the Vale, and how the Vale ultimately remains with House Arryn.

More like this
Entertainment
Jan. 30, 2023
New House of the Dragon “making-of” book plunges into the fantasy hit’s creation
By Jeff Spry
Entertainment
Feb. 2, 2023
The DC Universe is Taking the HBO Approach With Its TV Shows
By Dais Johnston
Entertainment
Jan. 28, 2023
Last of Us Episode 3 release date, time, and trailer for HBO's zombie show
By Claire Fox
LEARN SOMETHING NEW EVERY DAY.
Related Tags
Share: