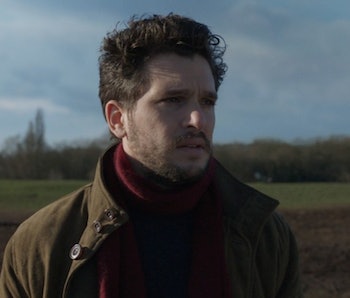 Are you sure you’re ready, Mr. Whitman?

It’s been almost a year since Kit Harington’s Dane Whitman learned an ancient family secret in Marvel’s Eternals. Now the actor is opening up about a possible return, teasing more to come with his role as the Black Knight.

In a chat with The Hollywood Reporter, Harington described the “really exciting” filming of the Eternals post-credits scene, in which Whitman unearths his family’s heirloom: The cursed Ebony Blade. The scene also gave us the first appearance of Oscar-winner Mahershala Ali, as Blade, off-camera through voice-over.

“That post credits stuff, you come back and fill them after the film’s finished. So to see that there could be a continuation is obviously exciting,” he said.

On a future for Dane Whitman and his Black Knight in the Marvel Cinematic Universe, Harington said, “I don’t know anything further. I know that there are plans, I think, at some point, but I don’t know what they are.”

Notably, Harington said he took the role because of its potential for a lasting future. In the comics, Whitman takes up the Ebony Blade to become the Black Knight. Originally held by his uncle, who used the identity as a villain, Dane reclaims it as a force for good and eventually joins the Avengers.

“I kind of knew that that might be a possibility,” Harrington said. “I wasn’t that interested in rocking up in a Marvel movie just to play someone’s boyfriend. I knew of some future possibilities, so that’s always been part of the conversation. But like with anything, you don’t really know. You sort of do your research on what character it could be, and you go, ‘Oh, that looks quite fun.’ But it’s up to them whether they want to bring that person into their plans.”

In last year’s Eternals, Harington’s Whitman was a museum employee and boyfriend to Sersi (Gemma Chan). He represented Sersi’s attachments to modern Earth, so while he meant a lot to the story, the globe-trotting and centuries-spanning plot forced Harington to sit out most of the action. But, with the encouragement of Sersi, Dane reconnected with his estranged uncle and learned a surprising family secret.

That secret is revealed in the movie’s post-credits scene, where Dane opens a locked box with a crude Latin inscription that reads “Mors mihi lucrum,” or “Death is my reward.” Inside is the Ebony Blade, a cursed sword of unknown origins.

In the comics, the sword was forged by the fabled sorcerer Merlin from a meteor, and given to Sir Percy of Scandia, a sixth-century knight who served at King Arthur’s court. The Ebony Blade was cursed by all the souls it killed, and the sword is passed through Sir Percy’s lineage before falling into the hands of his distant descendant, Dane Whitman. Sometimes Sir Percy counseled Dane as an apparition, though in Doctor Strange #68, the Sorcerer Supreme helped free Sir Percy’s soul.

With Phase Four of the MCU ending and Phase Five mapped out, it’s unclear when Kit Harington’s Dane will hoist the Ebony Blade and fulfill his destiny as the Black Knight. But with two Avengers movies on the horizon and a fight with the powerful Kang the Conqueror looming large, Avengers 5 (and the Blade movie that’s slated to come out first) would be natural fits for the character.

The Black Knight, after all, becomes an Avenger in the comic books, and a high-profile actor like Harrington would be wasted in a spinoff or background role. Plus, the actor used to be dismissive about the possibility of future MCU appearances, and now he’s full of hints. The Avengers are about to need every hand on deck, including those wrapped in black armor.