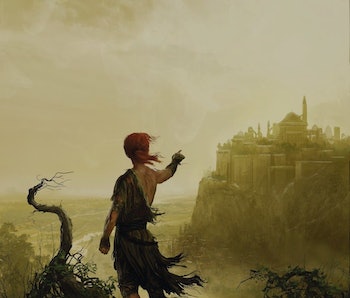 We’re coming up on 10 years since the release of the Game of Thrones series, but the love of fantasy epics and their adaptations isn’t slowing down in the least. However, the production of these books is. Fans have now waited over a decade for the release of The Doors of Stone, the third book in Patrick Rothfuss’ gigantic and all-encompassing fantasy series, The Kingkiller Chronicle. Here’s everything we know about the much-anticipated book, from when we’ll see it hit shelves to what possibly could be in store.

The first two books detailed the story of the adventurer and bard Kvothe, as he encounters all sorts of intrigue and fantasy escapades. The third book promises answers to how Kvothe, who reminisces of his adventures at the inn he runs, winds up where we met him at the start of the series, and conclusions to the many subplots introduced throughout.

When is the The Doors of Stone release date?

That's the million-dollar question. Release dates for The Doors of Stone have ranged from 2014 to 2018 and everywhere in between. The previous glimmer of hope hinted at a possible August 2020 release date, which obviously wasn't true. There’s another rumor fueled by an old German Amazon link that the book could arrive in July 2021, but don’t hold your breath.

Patrick Rothfuss does have some news on the matter, though. Since the start of the pandemic, he has held many fundraisers for his charity Worldbuilders, and along the way has answered some fan questions about what possibly could be coming in the future. Mainly, he needs to bring what he had already written as part of initial planning for the series up to the standard set by the other two books.

"Book 3…a lot of it was written in ’98. I was not as good a writer. And even the parts of it that are good writing didn’t match up with the parts of the book I had changed to make the story function better."

In an earlier podcast appearance for Barnes & Noble, Rothfuss declared he "doesn't think about deadlines" anymore, and the book will be released when it's finished. There’s no arguing about that, it’s just a matter of when it will be finished, which is a lot more complicated question.

Is The Doors of Stone written yet?

In 2013, Rothfuss posted a picture of the first draft of The Doors of Stone to Google+. In the post, the author said it would be easier to revise with the aid of Google Glass. While the sentiment hasn't exactly aged well, rest assured there is a completed draft of the book. The post is long gone due to the demise of Google+, but lives on through Reddit.

However, all this talk does not align with what Rothfuss’ editor revealed in a Facebook post, saying she had not seen a single word of the Doors of Stone draft, despite it apparently already being completed. Revising is important, but there are hordes of fans desperate for the next tome, warts and all.

Is there a cover for The Doors of Stone?

Once again, the wait is still on for even a cover reveal for the third book. While fan covers run rampant and many are pretty convincing, there's no official art to mine for clues about the book.

Due to an email mixup in 2015, fantasy book blog Pat's Fantasy Hotlist accidentally received an email containing the preliminary sketches for the The Doors of Stone, containing the color orange and a lute in some capacity. It's not much to go on, but it's all we know so far.

Are there spoilers for The Doors of Stone?

Rothfuss gave two interviews to Tor.com in 2012 and 2017, revealing that The Doors of Stone will conclude the Kingkiller trilogy, but won't be the last work set in that fictional universe. The author also revealed Kvothe will travel more, visiting Renere, the "three-part city." In the 2017 interview, he teased the reveal of how Kvothe became an innkeeper, as well as how he met his future apprentice Bast.

Considering how meticulous Rothfuss has been in perfecting the book, it's a safe bet to say all the loose ends from The Name of the Wind and The Wise Man's Fear will be wrapped up. Rothfuss also told Tor the third book would be shorter than The Wise Man's Fear's 994 pages, but that still leaves plenty of room for a twisty-turny story and a satisfying ending.

In more recent fundraisers for Worldbuilders, Rothfuss revealed that while the University played a major role in the first two books, only about 20-50 percent of Doors of Stone will take place there. However, he leaked lots of fake plot elements in throughout the livestream, so there’s no way to tell for sure, but those numbers definitely sound too specific to be fake.

Are there any excerpts of The Doors of Stone?

Rothfuss hasn't made any excerpts of the third book available just yet. However, you've finished both The Name of the Wind and The Wise Man's Fear, there are a handful of in-universe supplementary novellas to tide you over. The short story "How Old Holly Came to Be" was included in the anthology book Unfettered. The Lightning Tree, a Bast-focused novella, was published in the anthology Rogues. A stand-alone novella, entitled The Slow Regard of Silent Things, was published in 2014.

Until we know more, these works are all we know about what's been going on in Temerant, so while we wait for The Doors of Stone to be perfected, it may be time to look elsewhere.

What other fantasy books are similar to The Doors of Stone?

If you’ve been waiting for the entire decade for The Doors of Stone, you’ve surely passed the time by dipping your toes into other fantasy series. But just in case there are some you haven’t read yet, check out this list which includes everything from the obvious (yes, this means A Song of Ice and Fire) to the more obscure. Read all those too? There’s only one thing for it: A Kingkiller Chronicle reread. Maybe by the end of that there will actually be some good news.

The Doors of Stone does not yet have a release date.