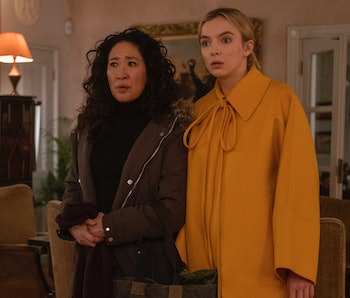 Now that Season 3 is over and done with, Killing Eve fans can look forward to Season 4, which received an early renewal back in January. After an uneven batch of episodes this time around, we're hoping to see Sandra Oh's Eve Polastri given more space to shine in the story to come. Here’s everything we know about Killing Eve Season 4, including release date, cast, plot, and more.

Spoilers ahead through the finale of Killing Eve Season 3.

After learning that her former flame Konstantin may (or may not) have been involved in Kenny’s death, Carolyn nearly kills him. Meanwhile, Eve and Jodie Comer's Villanelle were at an impasse, reluctant to leave each other while knowing that their relationship — which continues to be undefined within the scope of the show — cannot withstand the test of time.

When is the release date for Killing Eve Season 4?

There is no scheduled release date for Season 4. With all TV productions shut down at the moment, there’s no telling when Killing Eve will go into production for its fourth season. However, the U.K. government moved to allow film and TV production to continue as of May 31, albeit with some social distancing constraints. That means it's possible the cast and crew will be back to work soon, though these new limitations may delay things somewhat.

In a statement following news of the show's renewal back in January, executive producer Sally Woodward Gentle expressed her excitement that the show would be returning for another season.

“I am beyond thrilled that we can continue our extraordinary journey. It is testament to everyone involved that we have been picked up so early – the magnificent actors, writers, directors and production team. We are extremely lucky to work with such fierce and dedicated people.”

That said, the AMC series has historically premiered all three seasons in April, so it’s possible that Season 4 will premiere in April 2021. Stay tuned.

Who is in the cast of Season 4?

All the main cast members who didn’t die in Season 3 are expected to return in Season 4. That includes Sandra Oh, Jodie Comer, Fiona Shaw, and Kim Bodnia. Game of Thrones’ Gemma Whelan joined the cast in Season 3 as Carolyn’s daughter Geraldine. However, they had a precarious relationship and Carolyn pushed her aside. It’s unclear whether Whelan will reprise her role in Season 4.

Who will be the head writer for Killing Eve Season 4?

The AMC series has a history of bringing in a new head writer every season. In Season 1, that was Fleabag’s Phoebe Waller-Bridge, who passed on the torch to Emerald Fennell in Season 2, then Suzanne Heathcote in Season 3.

The head writer for Killing Eve Season 4 will be Laura Neal, who has written for Netflix’s Sex Education and Secret Diary of a Call Girl. In a statement, Sally Woodward Gentle had only great things to say about Neal.

“Laura is frighteningly bright, takes no prisoners and can laugh at anything. She’s wicked and wild, emotional and provocative. The stories we are already creating for season four promise a pitch-black riot.”

What is the plot of Killing Eve Season 4?

The Season 3 finale ended on a cliffhanger that saw Carolyn kill her MI6 boss Paul Bradwell, who was discovered to be a member of The Twelve, a secret organization that hires assassins to kill powerful people across Europe. Meanwhile, Konstantin went on the run after Carolyn tried to kill him. Eve and Villanelle seemingly decided to stay together.

At this point, we don't know much about what's to come in Season 4. However, it will likely pick up immediately after these events or, like with Season 3, next season will begin with a time jump of six months or less. At the very least, Season 4 won't have to explore the fallout between Villanelle and Eve, especially considering that neither of them engaged in any violence against each other in the finale.

Is there a trailer for Killing Eve Season 4?

No, there’s no trailer because Season 4 has not yet begun filming. Watch this space!

Where can I watch Season 3 of Killing Eve?

Season 3 is currently not available on any streaming service. The Season 3 premiere is available to stream on AMC's official site for fans who have a cable subscription. Previous seasons of Killing Eve have typically landed on Hulu in December, so keep an eye out for that.