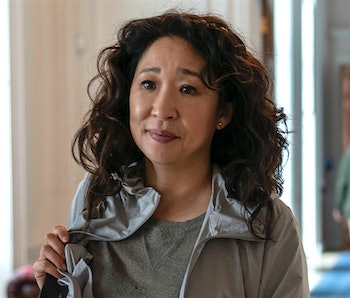 Killing Eve Season 1 was smart, sharp, and full of deadly mystery. Stars Sandra Oh and Jodie Comer had crackling chemistry that made the AMC series intoxicatingly stylish and thrilling. Filled with dark humor and twisted surprises, the cat-and-mouse thriller fired on all cylinders by focusing on Eve and giving us little snippets of Villanelle's exploits. Now in Season 3, Killing Eve has gone off the rails in one concerning way: it’s barely about Eve at all.

Killing Eve began its story with Sandra Oh’s Eve Polastri, a maligned British intelligence agent committed to bringing criminals to justice. That is until she crossed paths with Villanelle, a highly skilled and psychopathic assassin. Over the course of three seasons, Eve spiraled. Her obsession with Villanelle cost the lives of her friends, destroyed her most important relationships, and left her career in ruins. As the series went on, Eve seems to have been pushed to the background of her own story.

Eve's deterioration is fascinating, and the show could benefit from exploring how much her life has changed since we first met her. Instead, Killing Eve has shifted the focus away from Oh's character over the last two seasons. She’s now playing second fiddle to both Villanelle and Carolyn, Eve’s former boss and head of MI6’s Russia division.

Meanwhile, Killing Eve has given Villanelle a host of new characters to connect with in Season 3, including Dasha, the assassin who trained her; Konstantin’s bratty daughter; and Villanelle’s estranged family. All of this has made Villanelle more interesting and complicated.

Eve lost Kenny at the end of the Season 3 premiere, and her husband Niko basically hates her guts and wants nothing to do with her. However, Eve’s pain and grief are either played for laughs or barely touched on at all. What’s more, Eve didn’t even appear in the Season 3 episode, “Are You From Pinner?”

Her investigation into The Twelve has gone nowhere and she’s back to focusing solely on Villanelle, going so far as to track down Dasha to confront her. Killing Eve has disregarded its original main character and her development. The result is Oh receding further into the shadows instead of getting the attention she deserves.

Have the showrunners run out of meaty source material already, or will Eve emerge from her slump in the second half of the season? Either way, Killing Eve needs to get Oh back in action, before it's too late.