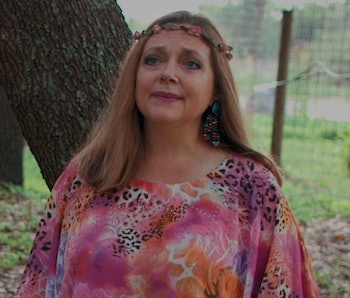 Tiger King is the number one show on Netflix right now, and it seems like everyone's got a take on what really went down between Joe Exotic and Carole Baskin. However, one person's take matters most of all: Carole Baskin. Amidst all of the quarantine-fueled frenzy surrounding the series, she released a pages-long statement addressing her issues with the show's portrayal.

With a scripted series starring Kate McKinnon as Carole Baskin in development, it's worth perusing this statement for ways the scripted series could show a different side to the exotic zoo rivalry shown in the series. With McKinnon also serving as executive producer, it's a safe bet Carole will play a big part, and possibly get a more sympathetic angle than the documentary, which heavily insinuates that Carole killed her own husband.

Here are 3 ways the Kate McKinnon series could diverge from Netflix's Tiger King.

Over the course of the series, Baskin's Miami sanctuary/zoo Big Cat Rescue was described as everything from a haven to a run-down backyard park. In her statement, Carole asserts that the zoo acts purely as a retirement home for big cats who are not able to provide for themselves in the wild. The small cages Joe Exotic purportedly shot pictures of at her zoo were merely necessary for the zoo's touchless policy: no human touches the cats aside from veterinary work, which she emphasizes is done by professionals, while Joe is seen treating his cats himself.

She pits the two zoos against each other:

Our smallest enclosure is the size of a small house, about 1200 sf, and our largest is over two acres, all in a natural setting full of foliage. In contrast, many of Joe’s tigers live in small, barren prison cells on pebbles.

While this may seem defensive, it provides an interesting way the scripted series could show the contrast in treatment in both zoos, instead of conflating them.

While the first section of Carole's response covers the general misconceptions of her work, the majority of it focuses on Tiger King Episode 3, which explained in detail how Carole's husband Don mysteriously went missing. While the details are murky, the response reveals something about Don that was omitted from the documentary: He was diagnosed with bipolar disorder.

Don saw Dr. Russell. He diagnosed Don with Bi-Polar Disorder and gave him a prescription to have an MRI at St. Joseph’s Hospital. I did not find the prescription until I was searching his bedside table looking for clues to his disappearance.

The show could definitely touch upon these moments, as they cast a light of innocence on Carole that was missing from the documentary. While Don's lawyer insisted he was entirely lucid, these statements seem too specific to be fabricated:

His behavior became increasingly strange. He started refusing to use the bathroom and defecating outside. He brought in a homeless man to stay in our house. I rescheduled an appointment for him to see the specialist Dr. Gold. But he disappeared before the appointment date.

The "or disappearance" phrasing

While it seems minor, the fact Don's power of attorney contract was phrased with the words "or disappearance" was treated like a smoking gun to the fact Carole anticipated Don going missing. According to her statement, the truth is a little more nuanced — and a lot more intriguing for a scripted series.

Don had told me about people going to Costa Rica and disappearing. Our Costa Rican attorney, Roger Petersen, said the Helicopter Brothers were the local version of the mafia and Don was loaning them money. That is why I included 'disappearance' as an event that would activate the Power of Attorney.

A Costa Rican mafia called the Helicopter Brothers getting involved in Don's finances is exactly the kind of juicy tidbit a scripted series could take and flesh out into a gripping subplot.

Carole concludes her statement by plugging the Wondery podcast Joe Exotic, which is the source material for the upcoming series. Hopefully, that means she'll have less issue with Kate McKinnon's adaptation. If you're anxious to hear what an even-handed discussion of Don's appearance sounds like, you can listen to the podcast here.