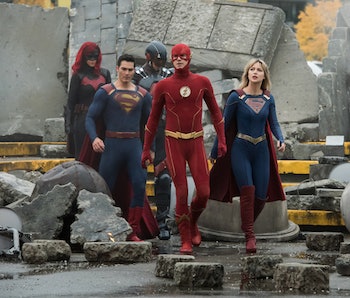 In 2000, The WB was the premier TV network for young adults. To celebrate its success with a now infamous network promo that BuzzFeed calls “too glorious for words,” it threw a party.

Featuring the casts of Dawson’s Creek, Buffy the Vampire Slayer, Felicity, and absolutely no one from 7th Heaven, the promo saw TV’s then-hottest teen stars bask in the glory of being young and hot. The promo ended in the trademarked statement “The night is young.”

This lavish party, replete with low rise denim and embroidered shirts, is now trapped in amber as the unofficial memorial for a bygone era. Because more than 20 years later, the party is officially over.

In a story broken by The Wall Street Journal and further supported by The Hollywood Reporter, AT&T-owned WarnerMedia and ViacomCBS are seeking to sell the influential CW Network. The Journal reports that Nexstar Media Group, a major broadcaster and owner of CW affiliates, is looking to acquire it.

With so much content in its library that’s ripe for streaming, and unmatched cache as purveyor of a very specific type of young adult programming that big streamers largely lack, there’s a simple question regarding the imminent end of the CW: Why?

Since it was founded in 2006, the CW has been the center of young adult TV with hits like Supernatural, Riverdale, and a gaggle of superhero shows that include Arrow, The Flash, and Supergirl. The network was founded on the ashes of both Warner’s WB and CBS-owned UPN, a similarly legendary network that often catered to overlooked Black audiences. (Tyler James Williams, star of Everybody Hates Chris, told the Opening Act podcast in 2020 that the end of UPN “created a void” for Black media in Hollywood.)

The CW launched in the mid-2000s and has carried the torches of both WB and UPN; its name has become shorthand for stories about angsty teenagers (“Power Rangers film would’ve been better as a CW series,” reads the headline of an Ars Technica film review from 2017). CW shows like Gossip Girl and Riverdale were spiritual successors to WB’s Dawson’s Creek, and the network’s penchant for genre, as seen in The 100, iZombie, and The Vampire Diaries, is a leftover from WB and UPN’s own habits that fused relatable, coming-of-age stories with heightened fantasy. The WB’s Smallville led to the “Arrowverse” franchise, and reboots of WB shows like Charmed and Roswell have season renewals at the CW.

Between its youthful appeal and onscreen diversity — which hasn’t been without problems, as pointed out in 2020 by Princess Weekes of The Mary Sue — the CW has an edge that networks and streamers lack today: identity. Netflix and Hulu both have CW-esque programming, but streamers still place a premium on volume over curation. Netflix shows that rival the CW, like Cobra Kai, The Order, and Locke & Key, don’t reflect the rest of Netflix’s oceanic library. That the CW is also a hub for superheroes means there’s always a tuned-in audience coming in from Comic-Con.

It’s hard to say what’s wrong with the CW, if the CW is indeed on its deathbed. A move towards streaming should have been a cinch with its breadth of mass-appealing content already sporting large fanbases. But The Wall Street Journal and Hollywood Reporter report that the CW has not turned a profit since its launch in the days long before streaming was part of the entertainment ecosystem.

Revenue was earned from “international and streaming sales,” including a now-expired deal with Netflix. “The network isn’t profitable as a stand-alone broadcast entity, but the content produced for it is a valuable asset for other platforms at the parent companies,” writes Joe Flint for The Wall Street Journal.

CW’s wasn’t profitable then, and it hasn’t been profitable now under parent company AT&T, which acquired WarnerMedia in 2018 and will soon spin off independently with Discovery. AT&T’s three years reign over WarnerMedia included the fast rise and fall of the stand-alone DC Universe service, now reduced to a comic book e-reader app. HBO Max, the true endgame for AT&T, has been much more successful; it boasts 73.8 million subscribers as of December 2021.

But its launch came with technical bugs and public disputes with filmmakers who felt blindsided when their theatrical films were sent straight to streaming. A December 2020 story by The Hollywood Reporter sourced insiders who said AT&T’s executives “don’t understand the movie business, and they don’t understand talent relations.” In an infamous quote, director Christopher Nolan called it “the worst streaming service.”

It might be amusing to evoke Nolan’s name in a story about the CW, but the point is that something has been amiss for a while if its woes trace back to before AT&T’s ownership.

2016 to 2019, when the CW annually greenlit most of its shows amid rumors of a streaming service, were curious years. It was as if the CW was preparing to sell a sheer volume of hours. Now what will happen to all those superheroes and moody teens? Realistically, the “end” of the CW — whether the new owners decide to terminate it, rebrand it, or sell it for parts — will see the respective Warner and Viacom shows end up in their companies’ respective streamers, HBO Max or Paramount+.

But it’s the future of the shows that’s unclear. What’s going to happen to the Arrowverse and shows still in development, like the live-action Powerpuff Girls, the Batman series Gotham Knights, the Supernatural prequel, and the Babylon 5 reboot? The outlook for creative salaries, such as writer’s pay and residuals, look bleak as the CW shifts from commercial-based TV to lesser-paying streaming. There still might be a future for the CW, but no one is partying anymore.