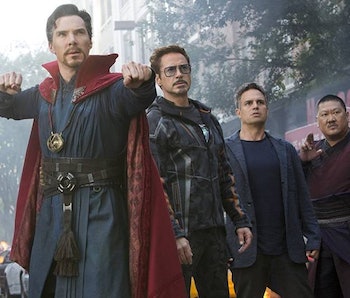 With summer just around the corner, the lac of a new Marvel movie is starting to set in. Luckily, the Russo brothers understand this pain. In order to soothe the withdrawal, they teamed up with Comicbook.com to host a community live-watch of Avengers: Infinity War. What resulted was a testament to the power of fan communities, but also a glimpse into what could have been.

Stephen McFeely, the screenwriter for Infinity War, tweeted a picture from production showing Benedict Cumberbatch as Doctor Strange in Iron Man's suit, accompanied by a "one can dream..." caption. Looks like we could have seen a lot of different versions of Doctor Strange's rescue from the clutches of Ebony Maw.

Doctor Strange in an Iron Man suit is not completely new: concept art was released in the book Endgame: the Art of the Movie showing the two characters sporting each other's signature looks, with Tony donning the Cloak of Levitation. However, it wasn't known until McFeely shared this set picture that the concept made it all the way to filming. The Russo brothers replied to the picture by saying "the best [version of the rescue] made the movie...I think."

Previously, the Strange / Iron Man costume swap concept was presumed to be a fun thought experiment, but apparently part of it made into production. After all, if you get your power from a suit, a surefire way to get someone out of a tight spot is to get them a suit of their own. Unfortunately, it had to be cut for time.

While this version of the Doctor Strange rescue was left on the cutting room floor, there's plenty more opportunities to use this twist in the future. With Doctor Strange in the Multiverse of Madness on the horizon, perhaps this could get explored not only as a way to use a leftover idea but to honor the late Iron Man.

As for the Iron Man part of the concept art, we saw a glimpse of Iron Man wearing Doctor Strange's Cloak of Levitation in a behind the scenes clip of Infinity War, but whether it was a part of the same version of the scene is unknown.

Considering that Sam Raimi is set to direct the Doctor Strange sequel, this could take a fun turn into the comedic, with a mystical hero like Doctor Strange trying to parse how Stark's technology would work on himself. Of course, it could be gilding the lily: he's pretty strong on his own.

We don't know much about this sequel, but with "Multiverse" right there in the title, it will surely explore different universes and realities. Perhaps one of these will involve a situation where he could use a gift from an old friend. After all, Tony bequeathed his glasses to Peter, maybe he left some gifts behind for this other teammates, too.