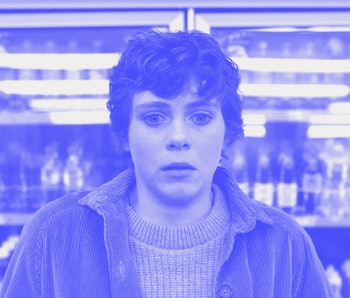 I Am Not Okay With This might feel like a John Hughes movie ripped straight from the '80s, but it ends in bloody mayhem. More Carrie than Breakfast Club, the final episode of this new Netflix original will shock you to the core, but what's even more shocking is that the explosive ending of I Am Not Okay With This Season 1 was created using practical effects — that might not sound like a big deal, but if you've seen what happens you know how wild it truly is.

To find out how I Am Not Okay With This created that powerful scene, we spoke to series creator Jonathan Entwistle, who told Inverse exactly what went into that ending and explained how it came together in the bloodiest way possible.

Warning! Spoilers ahead for the Season 1 ending of I Am Not Okay With This.

Still here? Great. So, as you likely remember from the gruesome images seared onto your brain, the thrilling climax of I Am Not Okay With This takes place at prom. Sydney (Sophia Lillis) goes to the dance with her friend Dina — who she also has a crush on — after Dina breaks up with her cheating jock boyfriend Brad. But then, Brad shows up brandishing Syd's diary, where she's detailed the dangerous superpowers she's developed but still struggles to control.

Right before he can reveal the juicy details, Sydney's psychic powers get the better of her and she pops Brad's head like a water balloon. Blood flies everywhere, covering the highschool gym and most of the students in it.

You might assume all that blood was added with computer graphics. After all, this is a big-budget Netflix from the same company that produced the CGI-heavy Stranger Things. But according to showrunner Jonathan Entwistle (who's fresh off the Netflix series The End of the F***ing World), he decided to go analog for one very important reason: It matched the 1980s vibe he was trying to create.

After all, if Entwistle wanted I Am Not Okay With This to feel like the '80s — even while taking place in modern times — he'd have to shoot it as if he was living in the '80s as well.

"One of the key approaches to the filmmaking of the show was to do as much in-camera and analog as possible," he says. "Pretty much all of the effects that you see on screen were done in-camera. That very much led us down the road of, how did they do these sort of quintessential horror, superpower, supernatural set pieces, pre-VFX?"

The answer, at least in case of Brad's exploding head, was a combination of practical effects, some old-school special effects work, and a bit of CGI.

The first part involved a lot of trial and error with lots of stage blood.

The second part of the equation was a little easier: "We did it in a very classic sense of superimposed. We shot Brad standing there and he fell to the ground at the right moment. And then we had different extras able to stand in there when we exploded a bag, kind of remote control that was filled with blood."

For everyone else involved, that means getting messy.

Finally, the special effects team did add a few extra details in post-production, including one that you might not have noticed the first time: "It's cleaned up and neatened up with a bit of VFX. I know the VFX guys had a lot of fun putting an eyeball and a tongue flying through the air in there too. But I think in general, pretty much everything is all done in-camera where possible."

I Am Not Okay With This is streaming now on Netflix.

More like this
Entertainment
5.15.2022 11:30 AM
You need to watch the most underrated superhero franchise before it leaves Netflix this month
By Dais Johnston
Culture
5.17.2022 8:30 AM
The 10 best Black Mirror episodes ever, ranked
By Robin Bea
Culture
5.18.2022 9:00 AM
Every Stranger Things monster from Dungeons and Dragons
By Robin Bea
Related Tags
Share: