Dyana? 'House of the Dragon' Episode 8 proves Alicent is better than Cersei

“I know it wasn’t your fault.” 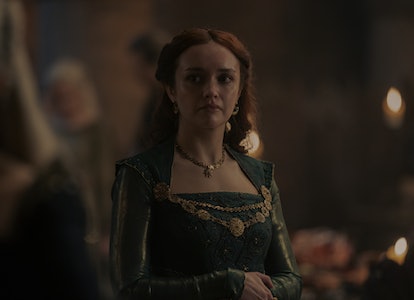 Game of Thrones has often been more about queens than kings. From Cersei to Daenerys to Sansa as Queen of the North, women have driven the action as much as the men — especially impressive in the patriarchal world of Westeros. But House of the Dragon introduces a new player into this group: Alicent Hightower, second wife of King Viserys Targaryen.

How does Alicent stack up against the previous scheming queen, Cersei Lannister? One key moment in Episode 8 reveals just how much she’s different — and maybe even better.

Cersei and Alicent are incredibly similar. Both were queens while their husband the king was of failing health, both had fathers who controlled much more than it seemed, and both dealt with accusations of illegitimacy in the next generation, both of which were true. (Although unlike Cersei, Alicent’s kids aren’t the ones with questionable lineage.)

Most importantly, both are characters that Game of Thrones fans love to hate, but Alicent seems to have a kind streak in her that Cersei never displayed.

Dyana and House of the Dragon

We see this exemplified at the start of Episode 8 when Alicent hears of her son Aegon sexually assaulting a servant girl named Dyana. Almost immediately, Dyana breaks down crying in front of Alicent, blaming herself for the event. Alicent soothes the girl, saying she believes her before noting that not everybody will. Alicent then hands her a sack of coins and makes her drink a special tea — presumably the abortifacient potion Rhaenyra drank after her night out with Daemon and later tryst with Criston.

But was that potion really just a precaution? After Dyana drinks it, the camera zooms in on Alicent’s face and we see something flash over her face: Regret, maybe? Or resolve? What exactly did that mean? There are many options.

Maybe she sees a young Rhaenyra in poor Dyana, a girl who was taken advantage of in a vicious society, leading to her eventual forgiveness later in the episode. Maybe she realizes how cruel her sons truly are, and how her manipulation of others has led to their entitlement. Maybe, just maybe, that potion wasn’t to prevent pregnancy at all but was actually a poison.

Regardless of which option is true, it seems Alicent at least has more of a conscience than Cersei. Even if the worst-case scenario is true and Alicent actually had the girl poisoned, she still paid her off — and that money would likely be passed on to her grieving family.

Cersei would never do that. She’s the one who ordered Sansa’s direwolf Lady be put down despite having nothing to do with Arya’s wolf Nymeria attacking Joffrey. (Then again, Alicent’s whole eye-for-an-eye demand in Episode 7 was just as bad, if not worse.)

Alicent may have been painted as the villain of House of the Dragon, but in Episode 8 she shows more empathy than Cersei managed to in eight seasons of Game of Thrones. Of course, the Hightower queen still has plenty of time to prove us wrong, but for now, she’s turning out to be a much more subtle villain.

House of the Dragon is now streaming on HBO Max.