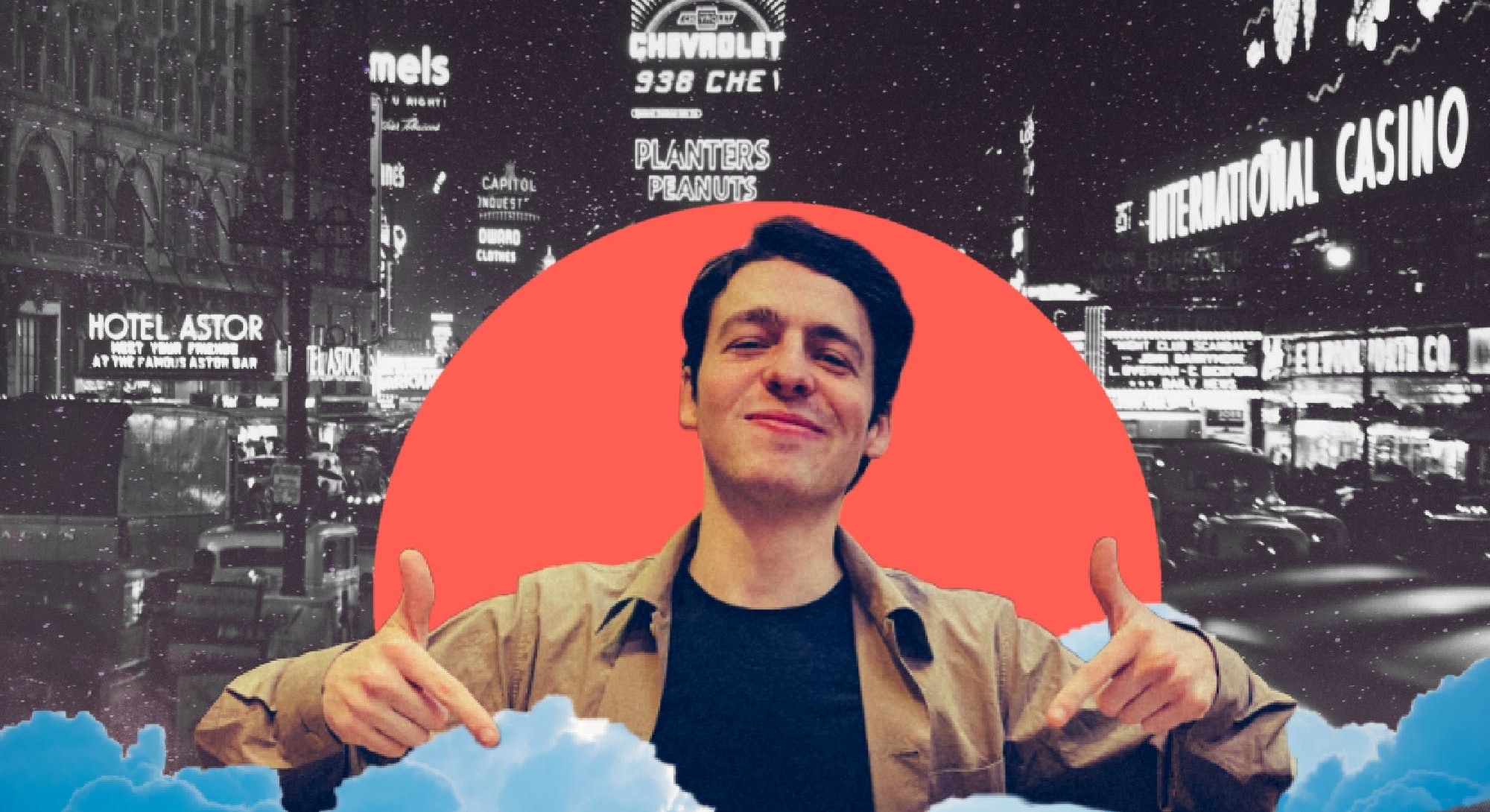 Anthony Boyle is only 25 years old, but he’s already being typecast.

“The majority of roles I've done, I'm playing posh English people who go to private school,” he tells Inverse, referencing his performances in Harry Potter and the Cursed Child, the biopic Tolkien, and even a bit part on Game of Thrones.

But in his latest role, Boyle swaps the trappings of the British upper crust for ... Newark.

He plays Alvin Levin, a wise-cracking Jewish smart guy from 1940s New Jersey in HBO’s The Plot Against America. Based on the 2004 book by Phillip Roth, Plot imagines an alternate history where America quietly sides with Germany during World War II, taking an isolationist stance while President Charles Lindbergh stokes anti-semitism in America until it explodes into violent racism. In response, Boyle’s character joins the Canadian army illegally and is shipped off to Europe to “kill Nazis.” He returns home missing one leg from the knee down.

Ahead of the show’s premiere, I schedule an interview and invite Boyle to meet me at one of the most Jewish places I can think of — Ben’s Kosher Deli in the heart of midtown Manhattan — wondering whether the young actor from Northern Ireland has ever tried a bowl of matzo ball soup, let alone some of the weirder cultural delicacies served at Ben’s and casually mentioned throughout The Plot Against America.

Waiting in a booth at the back of the deli, I wonder: Which version of Anthony Boyle will I get? The posh Englishman or the scrappy soldier from Jersey?

“The stuff that I was doing in school that I was told was wrong, when I was in a rehearsal room, that was celebrated.”

The answer is somewhere in between. Boyle is undeniably Irish (though he is a native of British Northern Ireland, he prefers to be called Irish). He's well-dressed with a soft brogue and pale, clean skin — but he’s done his research, too.

In an hour-long conversation over a meal that included several overstuffed deli sandwiches, one very large matzo ball soup, and a little-known dish called derma (my personal favorite), it becomes clear that Boyle understands the importance of a show like The Plot Against America — and the power of entertainment to educate, help us access our emotions, and tear down the walls that divide us — better than most.

“I’m not much of an eater,” he warns me before digging into a plate of fried kreplach (Yiddish for “dumplings”) filled with ground beef under a pile of fried onions. I make the mistake of describing the derma as meat and vegetables stuffed into an intestine lining (it’s really just a sausage casing) and he visibly recoils, instead reaching for the kasha varnishkes (bowtie pasta mixed with toasted buckwheat, more onions, and a thick brown gravy).

“It was actually quite an easy transition,” Boyle says. “I was looking at Jewish culture through my own culture. Very family-oriented, very loyal. There's so many similarities that it didn't seem like much of a massive shift.”

Of growing up in the Northern Irish capital, he says of Belfast: It's big for Ireland, but in terms of America, it's tiny. “Coming here was a culture shock.”

The middle child of two parents with “normal jobs, nothing artsy,” Boyle struggled in school until he discovered drama. He was expelled from middle school and was generally “badly behaved.” Then he found his calling.

“I was always sort of, like, banging on pots and pans,” he says. “But the stuff that I was doing in school that I was told was wrong, when I was in a rehearsal room, that was celebrated.”

“In Belfast, your whole life is political.”

Beyond being his introduction to acting, Boyle says that growing up in Belfast with the constant reminder of “The Troubles” helped him prepare for his most difficult role yet in The Plot Against America. From the late 1960s to 1998, explosive conflict rocked Northern Ireland, eventually leading to the construction of “peace walls” in the capital city and throughout the region to reduce violence by physically separating Catholics and Protestants.

“In Belfast, your whole life is political,” he says. “Before you’re even born, you're either going into a Catholic or Protestant environment. We still have 18- foot walls separating us. It's so politically charged. It's so ingrained in you. It's something you just take for granted.”

Playing Alvin helped Boyle reckon with his own country’s history.

So much of the behavior he’d taken for granted — from derogatory terms for Catholics or Protestants to throwing something at your television set when the queen was on TV — became clear as he dove headfirst into a totally different culture with its own painful past.

“When I was preparing for this part, it was really sort of giving me a lot of food for thought about my own culture and my own place in the world.”

Boyle’s big break came when he was cast for a small role on Game of Thrones. He only had two lines before Yara Greyjoy (Gemma Whelan) stabbed him to death.

“I was really bad,” he says. Whelan kept asking if he wanted to run lines despite him being barely more than an onscreen extra.

Then he was cast in Harry Potter and the Cursed Child as Draco Malfoy’s son, Scorpius. He dropped out of drama school in Cardiff, Wales, to take the role, which started on London’s West End and led to 18 months on Broadway in New York. (The show is still running, but Boyle’s moved on.)

“It was a real baptism by fire,” he says of the role now. “I look at my life as pre and post-Potter. Before, I was just a drama student. Everything changed for me after.”

“I look at my life as pre and post-Potter.”

Potter got Boyle an audition for The Plot Against America. He walked into the audition in character with a New Jersey accent and got the role. “I don’t think [showrunner David Simon] knew I was Irish, he says.

The miniseries was filmed at the same Brooklyn studio where HBO filmed The Sopranos and The Wire creators Simon and Ed Burns developed the adaptation. For Boyle, the significance of the show couldn’t be clearer.

“When I went to study acting, we were shown The Wire as like the pinnacle of TV,” he says. So it was kinda crazy to be working with David and Nina [Kostroff-Noble] and Ed.”

Boyle also prepared for the role by learning more about Jewish culture. He says his time on Broadway introduced him to several “Jewish mothers” who took care of him, but he also met with a Jewish brain surgeon, Dr. Jack Stern, who helped explain Jewish culture and even invited Boyle to a Passover Seder.

“I was just so overwhelmed with kindness, and it was my first Passover. It felt very special,” Boyle says. “He conducted it so well. It had a theme about immigration and being kinder to your fellow neighbor. It was really pretty beautiful. I want to do another one.”

At the end of the night, Stern gave Boyle a copy of The Plot Against America — signed by Philip Roth.

Another key component of Alvin Levin’s story is the loss of his leg in World War II. To perform the part, Boyle met with a soldier who lost his own leg in Iraq to discuss the many ways that kind of injury changes your life.

Boyle prepared for the role physically as well. In scenes where his leg is exposed, the bottom half is wrapped in green screen material. Otherwise, Boyle wore a knee brace that restricted his movement completely.

“It made me very frustrated and agitated because I couldn't fucking bend my leg,” he says.

With The Plot Against America finished and no possibility for a second season (the story ends pretty conclusively), Boyle is looking back at the theater.

“I want to go back and do some classical stuff. I haven't done that: Shakespeare, Chekhov. I don't really read many, like, Holy texts. I'm not very religious, but when I read Shakespeare, I feel more connected to the human experience.”

”I'd like to play a Hobbit ... you just chill out while everyone is shooting arrows and have a cup of tea.”

He’s interested in directing some theater, too, noting that he used to help out friends and classmates with their monologues.

As for his next big step, that’s a little murkier. If Boyle has something in the works, he’s not ready to share it, but as a handsome young Irish actor with a strong resume, he feels like an obvious fit for the next big war epic or superhero franchise. When I ask what his favorite fandom is, Boyle quickly brings up Lord of the Rings (“The extended cut. I'm way into that.”), and when I mention Amazon’s new series, he perks up immediately.

“I would be interested if they asked me to audition or do something,” he says. “I think I'd like to play a Hobbit. I think I'd be a good hobbit, Martin Freeman-esque. You get those big feet, you get to fuck around. You don't have to do the action stuff. You just chill out while everyone is shooting arrows and have a cup of tea.”

With all my questions asked and a mountain of Kosher deli food still in front of us, there’s one more thing left to do. “I’m not gonna let you leave without trying it,” I say, pointing to the plate of stuffed derma positioned as far away from Boyle as possible.

I clarify that this one probably isn’t wrapped in intestine lining, and even if it was, you’re only scooping out the meat and vegetable stuffed inside. I tell the story of my grandfather’s housekeeper, who took care of him at the end of his life and used to cook derma for us when we visited, making extra so we could bring it home afterward.

Finally, he takes a bite, nods, and swallows. Maybe it’s an acquired taste, but the fact that a young actor from Northern Ireland even knows what derma tastes like feels like a small victory.

Anthony Boyle is a member of the Inverse Future 50, a group of 50 people who will be forces of good in the 2020s.

Also read: The Plot Against America star on the dangers of fascism today