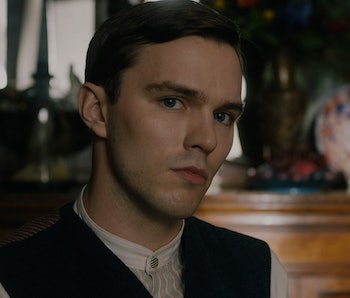 Lord of the Rings is about a war to eradicate evil, incarnate, little hobbits with the bravery to change the course of history and a fellowship that turns unlikely allies into friends.

Scholars and the Tolkien-obsessed know how these themes were reflected in author J.R.R. Tolkien’s life, but a new biopic from Dome Karukoski shows that Tolkien’s story is just as inspiring as Frodo Baggins bravely heading toward Mount Doom. It’s about time the 20th century’s most important author gets his own epic.

Tolkien explores the author’s formative years, dramatizing how his experiences as an orphan, hopeless romantic, and devoted scholar informed the fantasy novels for which he’d become famous. We even see the very moment that Middle-earth takes form in his mind and the word “hobbit” comes mumbling out of his mouth.

Nicholas Hoult stars as “Ronald” Tolkien in a movie that juggles being three things at once: It’s a tale of schoolyard brotherhood that rivals Dead Poet’s Society, it’s a warm period romance, and it’s a World War I tale of grit. It’s easy to see how each of these threads is woven into the grand tapestry of Middle-earth, but even people who don’t care for hobbits will find a gripping, beautiful, and relatable period piece.

“It’s a universal story of friendship and love,” director Dome Karukoski tells Inverse. “Being an orphan, Tolkien’s friends become his family, a place to belong — and then you go to war with them! That’s so touching to me that I know you don’t need to be a Tolkien fan to enjoy that. And the story of his love with Edith is written into history like a movie.”

Historians and purists — and apparently the Tolkien estate — might frown at some narrative adjustments that streamline Tolkien’s biography in the movie, but all the necessary bullet points are here.

Orphaned and entrusted to the care of a Catholic priest, the young Tolkien was eventually raised in Birmingham alongside his brother and a fellow orphan, Edith Bratt (Lily Collins). Though several years his senior, Bratt enchanted Tolkien, serving as something akin to his muse and inspiring stories of star-crossed lovers, like Aragorn and Arwen, in Middle-earth. Onscreen, Hoult and Collins’ electric chemistry far surpasses anything seen in Lord of the Rings. Even for people with barely a passing interest in Tolkien’s writings, the film still offers a charming love story that could make for one of the year’s best date movies.

While studying at King Edward’s School in his teenage years, Tolkien befriended three classmates: Geoffrey Bache Smith, Christopher Wiseman, and Robert Gilson. The four boys formed lifelong friendships and a secret artistic club through which they urged each other by sharing their music, poetry, and writing. This camaraderie channels a vibrant kind of “seize the day!” energy reminiscent of Dead Poet’s Society. It might feel a touch antiquated, but it still serves as the blueprint of male friendship we should all aspire to.

Throughout his entire life, Tolkien had an obsession with language and mythology, which eventually led him to pivot from classical literature to philology (the study of language) while studying at Oxford University, a setting that serves as a gorgeous backdrop for the second half of the movie.

Tolkien manages to overcome adversity and find happiness through art and love, but much of that is destroyed by World War I. His relationship with Bratt is put on hold, two of his childhood friends lose their lives, and a third never recovers from emotional wounds.

In some of its most stunning scenes, Tolkien mixes the author’s youth with his experiences in the trenches of World War I. Stricken with trench fever, Tolkien hallucinates flamethrowing German soldiers as dragons, and bursts of flame and smoke transform into demons.

It’s hard to know if this is truly how Tolkien experienced his life, but the script from David Gleeson and Stephen Beresford, with heavy input from Finnish director Dome Karukoski, takes a number of creative licenses to infuse Tolkien’s story with just enough surreal elements that nod directly to Lord of the Rings. They function as fan service, but the story does more than enough to earn the right to include them.

At one point, Tolkien lists virtues like friendship, fellowship, love, and magic as the themes that inspired his next “big story.” It’s easy to roll your eyes here. What do these words even mean to him? Thankfully, his life story shows us, whether it’s in his tireless devotion to Edith Bratt, even after their romance is forbidden, or in his dogged attempts to find his best friend amidst the chaos of a bloody WWI battlefield.

It would have been so easy to miss the mark, to descend into sappy melodrama and a saccharine-sweet message of Christian virtues, but Tolkien doesn’t. And while the story might come across as too heavy-handed for some viewers, the romance at its core is earnest and convincing; the fraternal bonds inspiring and unshakable.

Tolkien is an ardent and reverent meditation on art, language, war, love, joy, and even capital-F Fellowship. By focusing on the author’s life before he ever wrote The Hobbit, the movie reminds us that The Lord of the Rings isn’t only about wizards fighting demons and elves allying with dwarves.

What makes the books (and movies) so powerful is the genuine story about human nature, and how we can make the world a better place by creating something beautiful while forming friendships that last a lifetime. Tolkien succeeds by emphasizing that above all else.

Tolkien is rated PG-13 and opens in theaters on Friday, May 10.