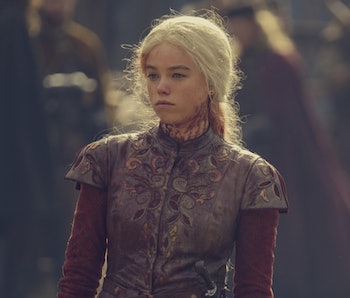 During Episode 9 of House of the Dragon, Rhaenyra is pregnant on Dragonstone and oblivious to the treacheries being concocted against her in the Red Keep.

Rhaenyra knew that succeeding her father wouldn’t be without its challenges — after all, she’d be the first woman on the Iron Throne — but now her own house members are fueling the flame-out of the Targaryen Dynasty.

Potential spoilers for House of the Dragon Episode 10 ahead.

Upon hearing of her father’s demise and her half-brother Aegon II Targaryen’s (Tom Glynn-Carney) coronation in the prequel books, Rhaenyra (Emma D’Arcy) goes into early labor.

We predict the Season 1 finale of House of the Dragon will follow the broad strokes of Martin’s text, as these events served as catalysts for the Dance of the Dragons and Rhaenyra’s reclamation of the Iron Throne.

Rhaenyra’s rage leads her to birth a deformed and stillborn daughter, which Rhaenyra blames on the Greens (Aegon II’s faction). Prince Daemon Targaryen (Matt Smith), her uncle-husband, then crowns her with the same crown worn by her father, Viserys I Targaryen (Paddy Considine), and his grandfather, Jaehaerys I (Michael Carter).

The Greens send an envoy to parley with the Blacks, offering peace terms that would let Rhaenyra and her descendants remain rulers of Dragonstone and Driftmark if she renounces her title. She rejects the offer and declares Aegon II and Alicent traitors.

Does Rhaenyra Targaryen become the first-ever Queen of the Andals, the Rhoynar, and the First Men? House of the Dragon's source material provides details of her likely ascension.

Major potential spoilers for House of the Dragon ahead.

How does Rhaenyra Targaryen become queen?

The sole mission of Rhaenyra’s Blacks, headquartered at Dragonstone, was to reclaim King’s Landing and place Rhaenyra on the Iron Throne. She had the endorsement of some of the most powerful Westerosi houses, including Arryn, Beesbury, Frey, Manderly, and Tarly.

Rhaenyra’s eldest son, Jacaerys, suggested the Blacks look for more dragonriders to gain an edge. Thanks to a successful recruitment campaign, along with Daemon and the King’s Landing City Watch that remained loyal to him, Rhaenyra and the rest of the Blacks were able to take the city. Queen Helaena Targaryen (Phia Saban) and the dowager queen, Alicent Hightower, were imprisoned, while Ser Otto Hightower (Rhys Ifans) was executed. Aegon II disappeared.

Septon Eustace (Simon Chandler) claims that when Rhaenyra sat on the Iron Throne, she was immediately cut and began dripping blood. Some took it as a sign that the Iron Throne, which is said to have supernatural properties, rejected her, while others took it as a symbol of her fervor and dedication to her position.

How long is Rhaenyra’s reign?

House of the Dragon may tweak Rhaenyra’s tenure, but in the source material she only sits on the Iron Throne for about six months.

Rhaenyra was initially welcomed by the smallfolk, as most had little respect or love for Aegon II Targaryen. Once in power, Rhaenyra ordered all the Red Keep’s traitors beheaded to set an example. Additionally, Rhaenyra was left with an unfortunate economic situation: The Greens hid most of the treasury and spent the rest. Desperate for money, Rhaenyra’s Master of Coin placed harsh taxes on the smallfolk. Rhaenyra’s reputation soon soured, and she was nicknamed “King Maegor with Teats.”

The Iron Throne made Rhaenyra paranoid and ruthless. There are several specific events from her short reign we won’t spoil, but they make her increasingly protective of her family and wary of her own ability to survive.

The smallfolk eventually turned on Rhaenyra after Helaena Targaryen’s (Phia Saban) suicide, which sparked rumors that Rhaenyra had ordered her execution. Riots destroyed the Dragonpit and prompted Rhaenyra to flee the capital, abandoning her throne. At this point, Rhaenyra’s strongest supporters had also lost faith in their queen. Her husband Daemon had grown estranged, and all of House Velaryon turned their backs on her.

Rhaenyra ran from King’s Landing on foot, not on dragonback. She sold her crown to buy passage back to Dragonstone on a Braavosi merchant ship, a poor plan with a horrifying aftermath.

How will HBO adapt Rhaenyra’s rule?

The Inverse Analysis — Rhaenyra Targaryen will sit on the Iron Throne.

That much we can say with confidence. HBO has taken a few creative liberties with the prequel show’s source material, but it’s mostly been aligned with the canon. House of the Dragon will not veer so far off its carefully laid path that the Greens wind up the ultimate victors of this tale.

But the Blacks won’t end the Dance of the Dragons smiling, either. Neither side is a clear winner— there is no “happily ever after” in this dark medieval fantasy. The path to power is a messy one, with as many regrettable heartbreaks and disturbing betrayals as there are triumphs.

The question of how Rhaenyra will be characterized on TV during her reign and downfall is more of a mystery. Thus far, Rhaenyra has acted much like her book counterpart, but her fan-favorite status has garnered her far more audience support than any of the Greens. It seems unlikely — though not impossible — that Rhaenyra will go through a regressive arc that depicts her as cruel, paranoid, and gluttonous.

The Targaryen queen will rule, and she will meet her end doing so, but perhaps with more dignity on-screen than on the page.

House of the Dragon Episode 10 soars to HBO this Sunday evening, Oct. 23.