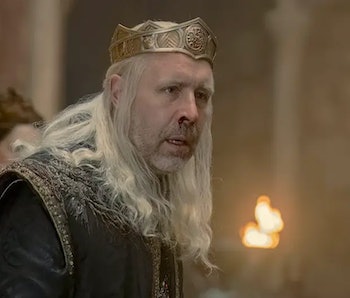 Perhaps it’s a coincidence that House of the Dragon Episode 8 aired close to Halloween, but we can’t help but wonder if the choice was intentional after watching King Viserys I Targaryen’s (Paddy Considine) ghoulish transformation.

Spoilers for Episode 8 of House of the Dragon ahead!

Six years have passed between Episode 7 and Episode 8, but we’re still in the prologue of the Dance of the Dragons, the civil war between Princess Rhaenyra Targaryen (Emma D’Arcy) and Prince Aegon II Targaryen (Tom Glynn-Carney). Per George R.R. Martin’s prequels, the struggle really kicks off after King Viserys I Targaryen dies and the half-siblings begin fighting for the Iron Throne. Rhaenyra was named heir by Viserys, but Aegon II is his first-born son.

After years of suffering a nasty illness, Viserys dies feverishly in his sleep, uttering delirious prophecies. The manner of his death was altered considerably, and the changes may impact the conflict about to unfold.

How does King Viserys Targaryen die in House of the Dragon?

It’s no surprise that Viserys wasn’t long for this world. Since Episode 2 he’s been suffering from an illness that rots his flesh, and he’s been treated with excessive leeches and lots of mystery teas. According to an Entertainment Weekly podcast, Viserys had leprosy, but after this week’s episode we’re skeptical of that diagnosis.

While newlyweds Rhaenyra and her uncle-husband Prince Daemon Targaryen (Matt Smith) have been shacked up with their children in Dragonstone, Viserys has degraded into a barely-breathing skeleton. Half his face has rotted off, his skin is covered in welts, he can hardly walk, and he looks about 50 pounds lighter than the last time we saw him.

The people in charge of Viserys’ care include Grand Maester Mellos (David Horovitch), Alicent Hightower (Olivia Cooke), and Otto Hightower (Rhys Ifans), none of whom can be trusted. The Hightowers want to secure the Iron Throne for their bloodline, while the Grand Maesters may not be as neutral as they’re supposed to be. In Viserys’ feeble state, his queen, Alicent, and her father, Otto, have taken the reigns in King’s Landing.

When Rhaenyra and Daemon stop by to introduce Viserys to his two new grandsons, Viserys II and Aegon III, they’re mortified by Viserys’ condition. Daemon notes the mystery tea on his brother’s nightstand, which Alicent and the Grand Maester prepare for him every day. It’s presumably the painkilling milk of the poppy, but Daemon has a sniff and looks dubious.

Viserys then stuns the entire Red Keep by not only wobbling to the Iron Throne later that afternoon, but also confirming that Lucerys Velaryon is the rightful successor to Driftmark. He also throws a dinner for his family, but takes a turn for the worse during the meal and is carried back to his quarters.

Later, Rhaenyra cries and bemoans Viserys’ decision to not replace her with Aegon II as heir, telling Viserys she doesn’t want the Iron Throne. Her only desire, she says, is to keep her extended family — Targaryens, Velaryons, and Hightowers — from falling apart and dividing King’s Landing. Viserys is too feverish to respond.

His last conversation, however, is pivotal. Later that evening, his wife forces him to drink more tea, and Viserys begins to deliriously talk about “The Prince that was Promised,” the prophecy dreamt by King Aegon I Targaryen and passed down by every Targaryen ruler since.

Viserys described Aegon’s dream to a young Princess Rhaenyra back in Episode 1.

“Aegon foresaw the end of the world of men. It's to begin with a terrible winter, gusting out of the distant North. Aegon saw absolute darkness riding on those winds, and whatever dwells within will destroy the world of the living. When this great winter comes, Rhaenyra, all of Westeros must stand against it. And if the world of men is to survive, a Targaryen must be seated on the Iron Throne. A King or Queen strong enough to unite the realm against the cold and the dark. Aegon called his dream The Song of Ice and Fire.”

How does King Viserys Targaryen die in the books?

HBO made several changes from the source material to characterize Viserys as a tragic hero who tried his (perhaps insufficient) best to keep his realm stable and his relatives happy.

In the prequel texts, Viserys’ death isn’t nearly as dramatic. Viserys accidentally cuts his hand on the Iron Throne, which leads to an infection that Grand Maester Mellos can’t heal. He loses two fingers and recovers from the infection, but his health never fully stabilizes.

Two years later, Viserys dies peacefully while napping in the Red Keep. The books make various insinuations — Otto, Alicent, or Daemon might have poisoned Viserys — but it’s all vague. Rhaenyra isn’t around, and Alicent doesn’t hear Aegon I’s prophecy. Rhaenyra’s ignorance of her father’s demise is a critical part of the drama that follows: Alicent takes advantage of the situation and hides Viserys’ body from the public while she plots against her stepdaughter’s ascension to the throne.

The Inverse Analysis — HBO’s creative liberties in adapting Viserys’ death for House of the Dragon were significant. Not only do we have reason to suspect that the Hightowers and Grand Maester Mellos were slowly killing Viserys, but Alicent’s reasoning for securing the Iron Throne for her son will now seem less malicious than her literary counterpart’s because she misinterpreted Aegon I’s prophecy. She knows Aegon II is ill-equipped for the job, but she thinks Viserys said he’s the Targaryen who will bring salvation to them all.

Meanwhile, Rhaenyra is well-aware that her father is an inch from death. She may have just flown back to Dragonstone, but she promised to return. Alicent won’t be able to lie by omission about Viserys’ death.

We have no idea what will happen after Viserys’ death, but we know that war is just around the corner.

House of the Dragon Episode 9 airs on HBO on October 16.