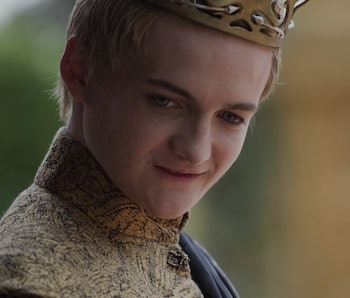 Aegon II has hollowed-out, baggy red eyes and the stench of ale on him. He’s completely unaware his father, King Viserys I Targaryen is dead. He’s been drowning his privileged man-child woes in the tough slums of King’s Landing — also known as Flea Bottom — ever since we met his aged-up self in Episode 6 of House of the Dragon.

But we’ve never seen Aegon this worse for the wear. And we’ve never seen King’s Landing quite this far gone either. In the process, House of the Dragon Episode 9 could reveal how one Game of Thrones storyline was even darker than we realized at the time.

Major House of the Dragon Episode 9 spoilers ahead!

What happened — Thanks to Mysaria’s (Sonoya Mizuno) intel, Aegon II Targaryen (Tom Glynn-Carney) is found sleeping off his hangover. Meanwhile, Mysaria explains to Aegon’s grandfather Otto Hightower (Rhys Ifans) that his grandson has recently spent less of his time in the Street of Silk brothels and more in child fighting pits where the lowliest and most disturbing human combat take place. There, kids are purposefully kept malnourished while the teeth and nails are sharpened for combat while spectators place their bets and cheer on.

Perhaps most horrifically, House of the Dragon strongly suggests that one of Aegon II’s bastards (of several) was abandoned to grow up in this environment.

Although they are briefly mentioned in both Episode 9 of House of the Dragon and in the A Song of Ice and Fire prequel novellas and novelettes, there isn’t much to say about the child fighting pits in Flea Bottom.

In Game of Thrones, we learned that children in Flea Bottom have a tough life. Many are born to smallfolk, who are mostly impoverished and illiterate, in spite of some having legitimate businesses in reputable trades.

Perhaps taking after Aegon II, King Robert Baratheon also left plenty of bastard children to survive on their own in Flea Bottom, although most of them were quietly murdered by the Lannisters to protect Joffrey’s claim to the throne with the notable exception of Gendry. Others lived in orphanages, which Queen Consort Margaery Tyrell (Natalie Dormer) visited in Season 3 along with Sansa Stark (Sophie Turner).

Barring an official statement from George R.R. Martin, however, we have no way of knowing if any of Robert Baratheon’s bastards wound up in Flea Bottom’s child fighting pits. Episode 9 of House of the Dragon is the first time in franchise history to depict feral children physically wrestling each other (the zombified Children of the Forest don’t count).

Where have we seen fighting pits before on GoT?

Though we know fighting pits of all kinds exist in Flea Bottom in King’s Landing due to dialogue in Game of Thrones, they were often described as arenas where rats or sometimes dogs were made to fight with each other. The smallfolk inhabitants of the city — as well as highborn men and ladies — could pay to watch and take bets on the participants. In House of the Dragon’s source material, both Prince Daemon Targaryen and his daughter Baela were known to enjoy these petty gambles and cruel games.

The only time we ever saw a proper fighting arena with humans pitted against each other was during Daenerys Targaryen’s (Emilia Clarke) time in Meereen, where she proclaims herself queen, and liberates the slaves. As part of her negotiations with a Great Master, Hizdahr zo Loraq (Joel Fry), she agrees to reopen the fighting pits so the former slaves she freed could still find purpose in gladiatorial games.

We rarely ever see people — much less children — fighting each other with their bare hands in GoT. Jousting, battles, sword fights, and more “official” conflict scenes often featured weaponry of some kind.

The Inverse Analysis— Though both House of the Dragon and Game of Thrones are book-to-screen adaptations, the choices that ultimately make it to the final cut are intentional. Therefore, we have to look at the inclusion of Flea Bottom’s child fighting pits as one that presumably pushes the narrative of the TV show forward.

In this instance, it appears that HBO wants to be less morally ambiguous than its A Song of Ice and Fire source material, which never picks a side during the Dance of the Dragons. (Of course, the prequel texts are encyclopedic, meaning that it wouldn’t have made sense to write them with clear bias).

Aegon II Targaryen is House of the Dragon’s answer to Joffrey Baratheon-Lannister in Game of Thrones. Not only is Aegon II a bully, a heavy drinker, and a rapist, but he’s also a sadist who enjoys watching the most vulnerable in King’s Landing murder each other for fun. Worse, he opts to leave one of his bastard sons to become a Flea Bottom fighting pit child warrior.

Not even Robert Baratheon did that — we think.

The final episode of House of the Dragon airs Sunday evening, Oct. 23 on HBO.