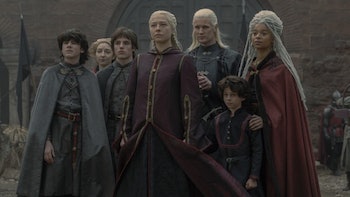 In classic Game of Thrones fashion, the Targaryen-Velaryon-Hightower-Strong family reunion in Episode 8 of House of the Dragon was full of bloodshed and banter.

House of the Dragon Episode 8 spoilers ahead!

Despite uncle Vaemond Velaryon’s (Wil Johnson) head rolling across the Red Keep’s floor earlier that evening, the dinner is mostly a celebratory affair, kicking off with the betrothal of step-siblings Lucerys and Jacaerys Velaryon with Baela and Rhaena Targaryen. The arranged marriages are one of the last decrees proclaimed by King Viserys I (Paddy Considine) on the Iron Throne before hdiedes later that night.

The boys seem pleased they’ll be wedding their step-siblings and cousins, and the feeling appears mutual. They all seem to get along and, because of Lucerys and Jacaerys’ secret status as bastards, they aren’t as closely related as some might think.

Rhaenyra (Emma D’Arcy) and Daemon (Matt Smith) are especially joyous about the betrothal, while Alicent (Olivia Cooke) and her faction aren’t as keen. These engagements not only strengthen Rhaenyra’s claim to the Iron Throne by unifying the Velaryon and Targaryen names, but also strengthen the weaker claims of her descendants by pairing her children with Daemon’s.

But do the marriages ever happen? The A Song of Ice and Fire prequel texts provide clues as to what will become of this arrangement.

In the books, Baela and Rhaena wind up marrying other men. Getting into why their nuptials with Lucerys and Jacaerys are broken would ultimately spoil much of Season 2, but we can get into who they end up with.

Baela marries Alyn Velaryon, a bastard rumored to be the son of either her uncle Laenor or, more likely, her grandfather Corlys. A dragonrider, Alyn was rumored to have taken many lovers before and during their marriage, including a Martell and Targaryen princess and a Faith of the Seven septa.

Rhaena marries a knight, Lord Corwyn Corbray of the Vale. Their happy time together lasts only a few years until Corwyn is slain. Later in her life, Rhaena marries Garmund Hightower and has six children with him.

Lucerys Velaryon never marries, nor does he have any rumored lovers. His brother Jacaerys, on the other hand, had a more enigmatic romance with a Stark bastard. It’s said, though never confirmed, that Jacaerys fell in love with Sara Snow when he traveled to Winterfell to secure the support of the Northmen during the Dance of the Dragons. Jacaerys and Sara supposedly married secretly, although accounts in the fictional history vary.

The Inverse Analysis— Though House of the Dragon has remained relatively faithful to its source material, it has altered the course of some events significantly, as well as the ages of characters during those events. In the books, Rhaenyra and Daemon’s children are betrothed when they’re toddlers; on-screen, they’re betrothed as teenagers.

As such, it’s difficult to tell what relationships HBO will change. To keep the drama juicy and the narrative marching forward, the Targaryen-Strong, Targaryen-Velaryon, and Targaryen-Hightower sons and daughters may live longer than they do in the books, providing them more opportunities during and after the Dance of the Dragons to establish relationships.

House of the Dragon Episode 9 airs October 16 on HBO.