“Beware the beast beneath the boards.” 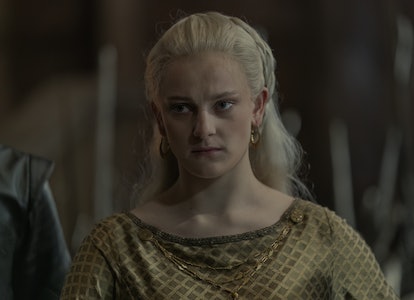 What’s the deal with Helaena Targaryen? While Alicent’s only daughter doesn’t get a lot of screen time in House of the Dragon, fans have noticed that she seems to be mumbling her way through some pretty pivotal prophecies on a weekly basis. And in Episode 8, Helaena delivers what might be her most important prophecy yet.

Episode 8 of HBO’s House of the Dragon isn’t lacking when it comes to ominous moments. The Game of Thrones prequel’s latest installment, titled “The Lord of the Tides,” not only features the overdue passing of King Viserys I Targaryen (Paddy Considine), but it also plants the final seeds for the ultimate conflict between Alicent Hightower (Olivia Cooke) and Rhaenyra Targaryen (Emma D’Arcy) that has been brewing for almost the entirety of House of the Dragon so far.

Additionally, tucked in between all of House of the Dragon Episode 8’s violent and game-changing moments is a prophecy that’s very briefly read aloud by none other than Helaena Targaryen (Phia Saban). If a leading fan theory is to be believed, Helaena’s latest warning may have just set up one of House of the Dragon’s darkest moments, too.

Helaena’s Prophecy in House of the Dragon Episode 8

During the climactic dinner scene in House of the Dragon Episode 8, Helaena Targaryen briefly notes that those in the room should “beware the beast beneath the boards.” As was the case when she nonchalantly predicted that her brother, Aemond (Ewan Mitchell), would lose his eye, Helaena does not offer any further context about the “beast” she warns her family members about in “The Lord of the Tides.”

Fortunately, those who’ve read Fire & Blood, the 2018 novel that inspired House of the Dragon, may already have a pretty good idea about the truth hidden beneath Helaena’s latest prophecy. If those fans are correct, that means House of the Dragon Episode 8 has just set up the introductions of two of the show’s most nefarious characters.

“The Beast Beneath the Boards”

While the full nature of Helaena’s prophecy has yet to be revealed, a certain section of House of the Dragon viewers believe the “beast beneath the boards” she just warned about isn’t just one character, but two. Specifically, some fans believe Helaena’s latest ominous comment has foreshadowed the inevitable arrival of Blood and Cheese, two characters who will prove to be key players in the Dance of the Dragons.

Without spoiling anything too specific, Blood and Cheese’s actions during the Dance of the Dragons help to further gaps between the Hightower, Targaryen, and Velaryon sides of Westeros’ royal family that are ultimately impossible to close. For that reason alone, it makes sense for Helaena to predict Blood and Cheese’s future introductions in the same episode where reconciliation between King Viserys’ estranged family members momentarily seems within reach.

Blood and Cheese’s actions directly affect Helaena, Aegon II, and Alicent, which only makes Helaena’s indirect mention of them that much more tragic. Cheese is also, notably, a King’s Landing ratcatcher who is intimately familiar with the Red Keep’s hidden tunnels and passageways, so it’s certainly not ridiculous to assume that he’s the “beast beneath the boards” that Helaena refers to in House of the Dragon Episode 8.

In fact, Blood and Cheese use those very same tunnels to infiltrate the Red Keep at one point and commit what is probably one of the biggest atrocities of the Dance of the Dragons. The less that’s said about that now, though, the better.

The Inverse Analysis — Ever since she was introduced, Helaena Targaryen has been making off-handed remarks that carry far more weight than they initially appear to. It seems safe to assume that’ll prove to be true for her ambiguous comment in House of the Dragon Episode 8 as well, which may not only signal the forthcoming debuts of two notable characters from Fire & Blood but may also set up a tragic, brutal moment that’s still to come.

New episodes of House of the Dragon air Sundays on HBO.