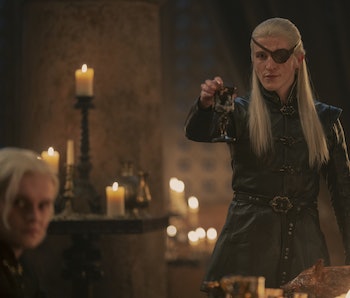 It’s all fun and games until someone loses an eye. We can temporarily put our funeral attire back in the closet as the mournful ceremony for Laena Velaryon concluded, a royal eye was gouged, an old dragon was stolen, a Queen went berserk, and an uncle and niece secretly wed in murky darkness.

We’re galloping into the last three episodes of House of the Dragon Season 1. Here’s everything you need to know as conflict looms on the horizon.

What happened in the previous episode of House of the Dragon?

We’ll have to put funerals next to weddings on the list of doomed rituals in the Seven Kingdoms, as Laena Velaryon’s somber burial at sea ended in drama and tragedy.

Lines of conflict were deepened during the sad Driftmark gathering, especially after Aemond bonded with the deceased Laena’s dragon, Vhagar, to the ire of Daemon’s twin girls and Rhaenyra’s bastard children. Insults were hurled, and Aemond ended up losing an eye.

During the tense discussion that follows, Queen Alicent takes retribution into her own hands by swiping her husband’s dagger and attacking Rhaenyra, shocking the crowd. Realizing that her destiny lies in her incestuous union with Prince Daemon Targaryen, Rhaenyra strengthens her claim to the Iron Throne by faking her husband Laenor’s assassination so she can tie the knot with her Uncle.

Civil conflict is a foregone conclusion at this point. Here’s how we’ll confront this familiar upheaval in Episode 8, “The Lord of the Tides.”

When is House of the Dragon Episode 8’s release date?

House of the Dragon Episode 8 lands exclusively on HBO on Sunday, October 9.

What is House of the Dragon Episode 8’s release time?

HBO releases weekly episodes of House of the Dragon at 9 p.m. Eastern.

How many episodes of House of the Dragon Season 1 are left?

House of the Dragon Season 1 will have 10 episodes, so we’re approaching the final stretch.

What is the plot of House of the Dragon Episode 8?

Hold on to your timepieces as we prepare for a final leap into the future, with the Episode 8 preview suggesting several years have passed. Prince Aegon and Prince Aemond, the latter now sporting a black eyepatch, are older and appear to have nefarious plans on the brain. Rhaenyra’s boys, Jayce and Luke, are also older, and will be put in harm’s way as Queen Alicent and her father, Otto Hightower, attempt to seize the throne.

Meanwhile, with Lord Corlys Velaryon apparently on his last legs after a wound suffered in the Stepstones, there’s wild jostling for the Driftwood Throne just as King Viserys is rendered bedridden.

Who is in House of the Dragon’s cast?

Is there a trailer for House of the Dragon Episode 8?

Yes, HBO released an enticing preview of Episode 8 featuring Otto Hightower sitting on the Iron Throne in the stead of the ailing King Viserys, older versions of the troublesome Targaryen princes, The Sea Snake suffering a serious wound, Vaemond Velaryon storming into the Red Keep, and Rhaenyra and Daemon contemplating taking the Driftwood Throne and embarking on a little side trip to King’s Landing.

Will House of the Dragon get a Season 2?

Absolutely. Series creators Ryan Condal and George R.R. Martin insist there’s an abundance of material yet to cover, and they plan on continuing the series for a total of three to four power-hungry, family-destroying seasons.