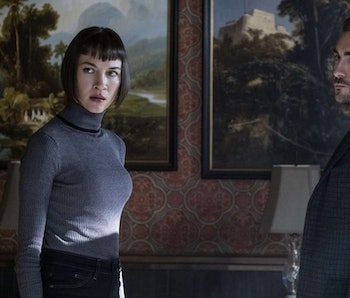 This article about the superhero series Helstrom was originally published on May 1, 2019 and updated on October 31, 2021 following the release of the season on Hulu. Read on for the original article, with some new changes to reflect the latest updates on this topic.

Hulu teamed up with Marvel to bring fans a devilish new series in Helstrom. The live-action series’ look was much darker and grittier than what we’ve become accustomed to seeing over in the Marvel Cinematic Universe.

Helstrom was the last remaining Marvel live-action series to launch outside of Disney+. Ghost Rider was supposed to debut on Hulu as well, but it was ultimately scrapped when Marvel Studios promoted Kevin Feige to oversee its television branch, and Executive Vice President of Marvel Television Jeph Loeb left the company in late 2019.

Helstrom (which has dropped an “l” from its original comics title, Hellstrom) introduced siblings Daimon and Ana Hellstrom, Satan’s spawn and hunters of the supernatural. Here’s everything to know about the series.

Who are the Hellstrom siblings?

Daimon and Satana Hellstrom (who’s going by Ana on the Hulu series) have had a robust life in the world of Marvel Comics since they made their debuts in 1973. In the comics, Daimon and Satana are the children of Satan after he decided to use a woman (in the case of the siblings, that woman is their mother, Victoria Hellstrom) to help create a gateway between the human and demonic world and strengthen his powers. So naturally, he took a human form, married Victoria, and started a family.

Daimon and Satana’s father eventually whisks Satana to the underworld when Victoria discovers his true identity, leaving Daimon to grow up in an orphanage and become an occult expert who occasionally battled his sister and encountered other Marvel heroes like Doctor Strange. Meanwhile, Satana learned all there was to know about her father’s powers and returned to Earth, wielding those abilities as a part-demon.

Daimon has no explicit superpowers, but in the comics, he drives a chariot pulled by three demonic horses (Hecate, Amon, and Set), and he fights with a trident. It’s safe to say that even if he can’t do anything supernatural, he’s pretty skilled in hand-to-hand combat and is somewhat protected from harm through supernatural means as the son of Satan.

On the other hand, Satana is part demon and part succubus with powers ranging from life-force absorption to superhuman strength and durability to hellfire manipulation to astral projection.

When was the Helstrom release date on Hulu?

Helstrom premiered on October 16, 2020 on Hulu. The season consisted of ten episodes, which all dropped at once.

Who is in the cast of Helstrom?

What is the plot of Helstrom?

Daimon and Ana Helstrom are the son and daughter of a mysterious and powerful serial killer in Marvel’s Helstrom. The siblings have a complicated dynamic as they track down the terrorizing worst of humanity — each with their attitude and skills.

Is there a trailer for Helstrom?

Yes! The first teaser for the series came at the virtual Comic-Con panel for Helstrom in July 2020. You can watch that below.

The official trailer dropped on September 23, less than a month before the series was released.

How can I watch Helstrom?

Helstrom is exclusively airing on Hulu. Thankfully, as a Hulu original series, you can watch it whenever you want once you sign up for the streaming platform.

Unfortunately, yes. In December 2020, Hulu announced that Helstrom’s first season would be its last. The move is not surprising, given that the show was the last effort to produce an MCU not under Marvel Studios. Given the direction things were going, it’s likely Disney wanted to tie up that loose end.

Helstrom is currently streaming on Hulu.

This article was originally published on May 1, 2019