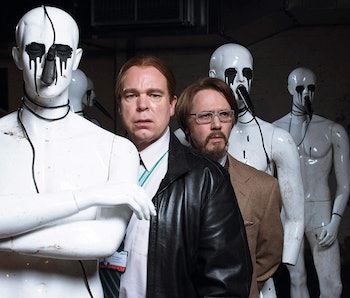 Hidden amongst the Godzilla movies and Looney Tunes cartoons on HBO Max lies a small, half-hour BBC anthology series called Inside No. 9. It seems quite low-budget and cheesy at first glance, but beneath the conspicuous wigs and childish jokes lies a comedic ambition that is matched by any other half-hour series. Here's what makes it so great, and the best episodes of the bunch you can watch in any order.

Inside No. 9's premise is simple, and leaves a lot of wiggle room for the writers to mix things up. Every episode takes place in one singular location called "Number 9," whether it be house #9, the ninth floor of a hotel, train car #9, or even a restaurant called Number Nine. This singular location means each story is restricted to one set, meaning the story unfolds as if it were on a stage.

The masterminds of this show are writers and frequent stars Steve Pemberton and Reece Shearsmith, who have been working together for decades. Together, they craft these intricate tales, then recruit guest stars to fill out the cast along with them. Renowned actors like Bandersnatch's Fionn Whitehead and Killing Eve's Fiona Shaw breathe life into the characters who never seem to be completely normal.

The selling point of Inside No. 9 is its sheer ambition. In just its second-ever episode, it pulled together a completely silent story depicting Pemberton and Shearsmith's characters on an art heist. This episode, "A Quiet Night In," was not only captivating, it stole tricks from silent movies to somehow create a suspense story filled with slapstick comedy.

Just like The Twilight Zone before it, Inside No. 9 rarely has an episode without a rollicking twist ending that will leave your mouth agape. The claustrophobic nature of the show allows for these reveals to be hidden in plain sight, and you'll wonder how you ever missed it. There's a distinct quality of the show being cleverer than it lets on, and it uses it to its advantage.

Since Inside No. 9 is an anthology, here are the five best episodes of its five seasons to start with:

With all five seasons streaming on HBO Max, the first time the whole series has been streamable in the US, try an episode out and see if you have the courage to enter number 9.

More like this
Entertainment
Sep. 26, 2022
House of the Dragon Episode 7 trailer reveals a shocking new mystery
By Dais Johnston
Entertainment
Sep. 14, 2022
Here’s when Rick and Morty Season 6 will arrive on Hulu and HBO Max — and how to watch it now
By Mónica Marie Zorrilla
Culture
Sep. 26, 2022
House of the Dragon cast change: That confusing time jump, explained
By Robin Bea
Related Tags
Share: