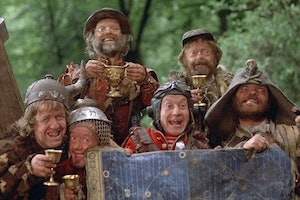 HBO Max is coming on May 27, and beyond their tentpole offerings of sitcoms like Friends and The Big Bang Theory, they are also bringing a wide catalog of Criterion films to their service. Criterion's collection of arthouse films is unparalleled, but their selection can get a little overwhelming. Here are six outstanding sci-fi, horror, and fantasy movies available on the fledgling streaming service.

6. Night of the Living Dead

George Romero's Night of the Living Dead didn't just shape a generation; it shaped a genre. It became the gold standard of horror movies for decades after, and countless directors credit it as an influence. On its own, it's still a great movie, and its message surrounding its Black lead ages well, considering it came out in 1968.

It's hard to imagine any zombie media not inspired by Night of the Living Dead in some way, so we have it to thank for works like The Walking Dead and 28 Days Later.

Criterion's 1,000th DVD release was a gargantuan collection of every Godzilla movie, so it makes sense that 12 Godzilla movies will stomp their way onto HBO Max very soon. From the original Godzilla to Terror of Mechagodzilla, there's enough content to create the best at-home film festival over a weekend.

Don't be fooled, though. There are more Godzilla movies than it appears in the catalogue. Movies like Destroy all Monsters, Invasion of the Astro-Monster, and Ghidorah, the Three-Headed Monster are all technically part of the Godzilla franchise. Rule of thumb: If it's got "monster" in the title, that's a Godzilla.

The late, great film icon Max Von Sydow stars in this world cinema classic, which not many people realize is a fantasy. The Seventh Seal, directed by Ingmar Bergen, tells the story of a medieval knight as he plays a chess match with the personification of death. It deals with the concepts of God and borrows a lot from the biblical Book of Revelation.

Calling this movie underrated wouldn't be true. It's often recognized as one of the greatest films of all time. However, it is underwatched. If you're in the mood for a cerebral, high-concept fantasy movie and trust the experts, check this one out.

3. I Married a Witch

Fantasy rom-coms are always loads of fun, and their roots go all the way back to Old Hollywood. In 1942, iconic pinup star Veronica Lake showed off her serious comedy chops as Salem-era witch Jennifer in I Married a Witch. In the same vein as future stories like Bewitched, Jennifer tries to use magic in order to seduce a man, and it always goes horribly awry.

While this sounds like any rom-com that could have been made in the 2000s, the black and white cinematography and aesthetics give it a distinct noir feel that makes it feel much more important than just another romance.

Vampyr, a 1932 horror movie directed by Carl Theodor Dreyer, is very weird. Filmed in the era between silent movies and talkies, most of the dialogue is delivered via title cards. All sound and the scant speech was recorded in post-production. The result is almost ethereal and a little confusing, but in a scary, disorienting way.

Dreyer shot the film in French, German, and English simultaneously, but Criterion released the German version, so it'll probably be only that one available to stream. If you appreciate the feel of the old monster movies like Dracula or Frankenstein, you'll find this a challenging but rewarding watch.

What do you get when you combine the comedy of Monty Python, the adventure of The Chronicles of Narnia, and the time travel hijinks of Bill and Ted's Excellent Adventure? 1981's family fantasy film Time Bandits. Directed by Monty Python's Terry Gilliam, this movie follows a young boy as he accompanies a troupe of "time bandits" who plunder the fabric of spacetime for riches.

This movie is just a wholesome good time, from the ragtag bunch of misfits (including one played by R2-D2 actor Kenny Baker) and a villain named only "Evil," to the end-credits song, written and performed by George Harrison specifically for the film. You might want to get a jump on watching this one, as there's a television adaptation in the works from Taika Waititi.