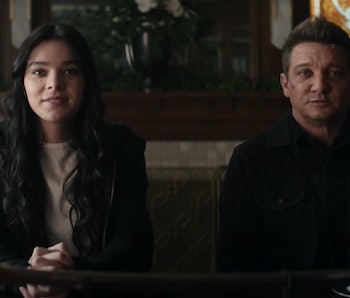 Marvel’s Hawkeye is halfway through its six-episode run, and unsurprisingly, things are starting to heat up. After finally developing something of a friendly banter together, Clint Barton (Jeremy Renner) and Kate Bishop (Hailee Steinfeld) are beginning to dive headfirst into the mysteries at the center of Hawkeye, including their inexplicable conflict with the Tracksuit Mafia and the murder of Armand Duquesne (Simon Callow).

Of course, Hawkeye Episode 3 also ended with Clint and Kate caught red-handed by one of the very people they’re investigating, putting them in yet another tricky situation. Fortunately, Hawkeye fans don’t have to wait much longer to see what direction their adventure takes them next.

Here’s everything you need to know about the upcoming Disney+ premiere of Hawkeye Episode 4 — from its release date to its possible runtime and plot.

When is the Hawkeye Episode 4 release date?

When is the Hawkeye Episode 4 premiere time?

What is Hawkeye’s release schedule?

Following the highly anticipated release of Hawkeye Episode 4 this week, there will only be two episodes left of the Disney+ series, with one premiering next Wednesday and the other debuting a week later.

The Hawkeye Season 1 finale will premiere Wednesday, December 22 on Disney+.

How long is Hawkeye Episode 4?

The first two episodes of Hawkeye both fell close to the 50-minute mark (counting credits), while its third clocked in at 44 minutes in length. While Marvel has not officially revealed the runtime for the show’s fourth episode yet, it seems safe to assume that it’ll likely stick to that 45-50 minute range.

What is the plot of Hawkeye Episode 4?

Without an official plot synopsis, it’s hard to guess what may or may not happen in Hawkeye Episode 4. That said, the show’s third episode ended with Clint being confronted with a sword by Jack Duquesne (Tony Dalton), so it seems safe to say that Kate’s tense relationship with Jack may finally come to a head in Hawkeye Episode 4.

However, it’s unclear how the episode will continue the Maya Lopez (Alaqua Cox) storyline introduced in last week’s installment.

Where can I watch Hawkeye Episode 4?

Like Marvel’s other 2021 TV shows, Hawkeye is a Disney+ exclusive series. As a result, only paid Disney+ subscribers can watch the series.

Is there a trailer for Hawkeye Episode 4?

In general, Disney+ tends to avoid releasing weekly trailers for its major Marvel or Lucasfilm titles. However, while the studio has not released an official trailer for Hawkeye Episode 4, Marvel did drop an interesting TV spot for the series last week that featured some exciting new footage from the show’s remaining four episodes. There may even be a quick shot of Florence Pugh’s Yelena near the end of it. You can watch the TV spot below.

Marvel also released a clip featuring Kate and Clint meeting Eleanor and Jack. Based on how Episode 3 ended, it looks pretty likely this scene might occur in this week’s new episode. Feel free to watch the official clip below while we all wait for Hawkeye Episode 4 to premiere on Disney+ this Wednesday.