“What does freedom really mean?” 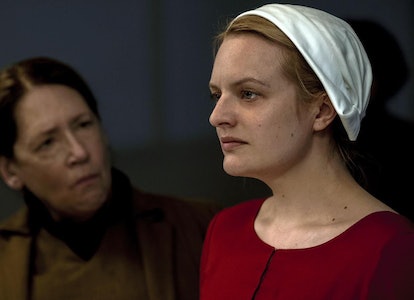 Under Hulu’s eye, The Handmaid’s Tale has been nothing short of a cultural phenomenon. In just three seasons, the streaming service’s adaptation of Margaret Atwood’s groundbreaking novel has nabbed multiple awards and accolades, fueled SNL skits, and inspired protests all over the world.

But the world looks very different in 2021 than it did in 2017 when Handmaid’s first premiered. How does Hulu’s zeitgeist-grabbing drama fit into our modern moment? How does it coexist in a world after the Trump presidency, one that’s still in the grips of a global pandemic?

Ahead, Inverse speaks with the cast and crew behind Handmaid’s Tale, searching for answers to those questions ahead of the show’s April 28 premiere.

What defines The Handmaid’s Tale in 2021?

When The Handmaid’s Tale first aired, Donald Trump was just beginning his term as President of the United States. Of course, this sparked comparisons left and right between the politics of America and the politics of Gilead, itself an uber-Evangelical conservative dystopia. The series offered up a cultural battle cry: “Nolite te bastardes carborundorun,” Latin for “don’t let the bastards grind you down.”

In 2021, Trump is no longer in office, but that doesn’t mean the dystopia of Gilead still isn’t comparable to today’s culture.

“I don't know if the swell of political opinions and emotions are different because of an election,” O.T. Fagbenle, who plays June’s husband Luke in the series, tells Inverse. “The populations which vote our leaders still exist, and the challenges which exist normally transcend any four-year period.”

This rings true within the world of The Handmaid’s Tale as well. While there have been shocking twists and turns along June Osborne’s journey, Season 4 finds the erstwhile Offred exactly where we first met her: Gilead, still trying to find her daughter and fight her way out.

June’s drive to rescue Hannah from Gilead was the engine of The Handmaid’s Tale from the start, and it’s still the engine. If anything, that engine is only revving up.

“Gilead remains the terrifying place that it is,” star Ann Dowd tells Inverse. “That impulse, the desire, the need to be free from the Handmaid’s perspective is everlasting.”

Of course, the award-winning Dowd’s views differ from those of her character, Aunt Lydia, one of June’s stalwart adversaries. Literally stabbed in the back in Season 2 and then betrayed by June in Season 3, Lydia’s drive has only intensified. Much as June will do nothing to save Hannah, Lydia is similarly inspired to rectify what she sees as the “abduction” of 86 children from Gilead to Canada. Now more than ever, the terrifying Aunt Lydia has grown steadfast in trying to get the girls in her care in line.

“Lydia wants to maintain her position of leadership, wants to do something for these girls who were just wayward,” Dowd says of Lydia and the Handmaids. “Their relationships are always going to be shifting, and what I love is where they go, what they teach one another, and how they surprise one another.”

As Miller tells it, the Handmaid’s Tale team is acutely aware of the responsibility they have in telling June’s story with all the depth and nuance it deserves: “The themes change all the time, because we've got Elisabeth Moss and with the depth that she's giving, you really have to think stuff through, or it's not going to be good. You're writing for somebody who's very, very good and you have to think it through, so I think that that keeps us on our toes.”

In other words: as the world changes, so too does June — and so too does The Handmaid’s Tale.