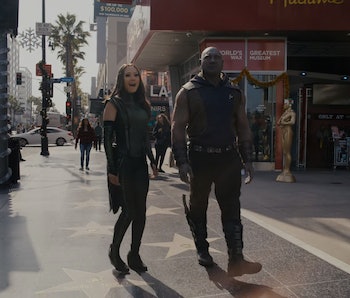 As if Avengers: Endgame didn’t make all of Hollywood officially six degrees separated, the next holiday special from Marvel Studios is bringing Kevin Bacon to the fold.

On Tuesday afternoon, just 24 hours after Marvel Studios released the trailer to Ant-Man and the Wasp: Quantumania, writer/director James Gunn tweeted the trailer to the upcoming The Guardians of the Galaxy: Holiday Special, a Christmas-themed spinoff set to stream exclusively on Disney+. The special will debut on November 25.

Set after Endgame — and, it appears, after Thor: Love and Thunder, based on how absolutely ripped Groot (Vin Diesel) looks — the special sees Star-Lord (Chris Pratt) still down in the dumps about losing Gamora. Observing that Christmastime is nearing on Earth, Mantis (Pom Klementieff) and Drax (Dave Bautista) head back to our planet to find the one person who could cheer up Star-Lord: the legendary Kevin Bacon (played by Kevin Bacon).

Previews of Vol. 3 at Comic-Con in San Diego indicate the next and final Guardians movie will have a darker, somber tone than previous films, with Rocket’s (Bradley Cooper) backstory a particular lightning rod for the movie’s emotional gut-punches.

You can watch the trailer for The Guardians of the Galaxy: Holiday Special below.

Holiday Special is shaping up to be very funny, so the Guardians haven’t yet lost their sense of humor. (Gunn himself has mentioned his affection for the infamous Star Wars Holiday Special, citing it as an inspiration for the project.) But with its plot grounded in Star-Lord still struggling to accept his grief, expect the sentimentality of the season to collide with what the kids call “all the feels.”

If nothing else, Holiday Special builds upon reoccurring mention of Kevin Bacon, who was first mentioned in 2014’s Guardians of the Galaxy and again by Mantis (likely learning from Star-Lord) in the third Avengers movie. Finally, after all these years, Star-Lord might meet one of his childhood heroes who can teach him the awesome power of letting one’s foot loose.

Bacon also notably starred as the villain Sebastian Shaw in 2011’s X-Men: First Class, which is retroactively now part of the Marvel multiverse. In some ways, you can say Kevin Bacon has been here all along.

As for the Guardians of the Galaxy, Holiday Special signals their imminent last call. After being fired from Marvel in 2018 over old tweets and rehired a year later, Gunn has found a place at rival DC through The Suicide Squad, Peacemaker on HBO Max, and a few related spin-offs in development. The next year will see Gunn wrapping up his time with the Guardians of the Galaxy, and it’s unclear if Gunn will pitch any more to Marvel when his DC duties are keeping him busy. For now, at least he’s giving the MCU the gift of Kevin Bacon.

The Guardians of the Galaxy: Holiday Special will hits on Disney+ on November 25.