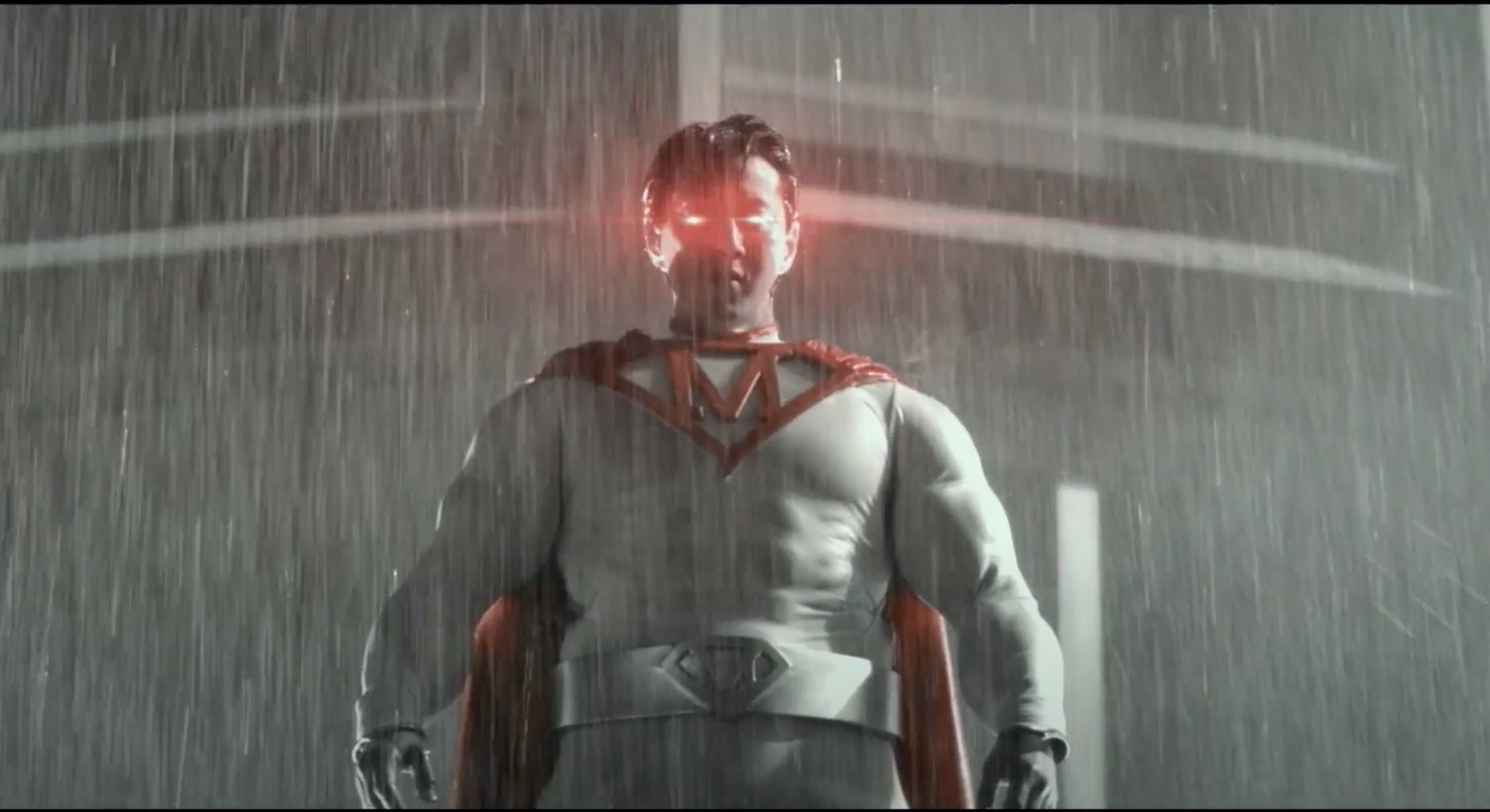 If art is an extension of the artist, Netflix’s new limited series The Guardians of Justice (Will Save You) is creator and showrunner Adi Shankar’s outstretched arms.

An original story by Shankar that fuses live-action with a variety of animations, Guardians of Justice tells of a superhero team in crisis mode after their leader, Marvelous Man (Will Yun Lee), kills himself on live television. Replete with ‘80s and ‘90s pop culture references over the bones of a superhero opera, Guardians of Justice is a half-animated, trippy reincarnation of Alan Moore’s graphic novel Watchmen.

Shankar was an executive producer on The Grey and Dredd, the creator and showrunner of the Netflix series based on the video game Castlevania. His “Bootleg Universe” series of short unauthorized satirical films on pop culture and comic icons cemented him as a creator to watch after his gritty take on the Power Rangers went viral. But even though Shankar has serious Hollywood and fandom credibility, most people didn’t even know Guardians of Justice, which premieres March 1, was coming unless they caught a screening at Cannes last September.

“I didn't want there to be any pressure,” Shankar tells Inverse of his decision not to lean into a major marketing campaign.

“I wanted to just come out of nowhere and drop something.”

“I didn't know if I could handle it, existing in that manner where you feel like all eyes are on you,” he adds. “You set a bunch of expectations, and you're trying to deliver as you see the entire arc of that situation. It’s a lot. I didn’t want to be jeopardized. I wanted to just come out of nowhere and drop something.”

But beyond how it's released or even how it was made, it’s what Guardians of Justice abstractly represents that best illustrates its power — and Shankar’s. Over a series of phone calls with Inverse in the summer of 2021 (the show’s release was delayed several times), the 37-year-old film and TV producer reveals how he set out to redefine and challenge the superhero genre in his most personal piece of work yet.

The marketing machine wasn’t the only aspect of traditional filmmaking that Shankar forwent with Guardians of Justice. Production took place sporadically over six years, and none of the show’s lead actors ever auditioned.

“I don't understand auditioning,” Shankar says. “Actors have done things. Go on Netflix or YouTube and see their work.”

“I felt the whole thing was inefficient,” he adds — a frequent complaint of his about the current Hollywood system. “Go watch the tape. How hard is that?”

“It was like trusting a lunatic with a fever dream.”

Actor Hal Ozshan — a friend of Shankar’s for 10 years who stars as TV journalist Van Dawson in Guardians — tells Inverse that, not only did he skip the auditioning process, but he was reading scenes long before production began.

“I've never fucking worked like that in my life,” he says. “It was like trusting a lunatic with a fever dream.”

“It was a cryptic experience, this weird fucking superhero art project my friend wanted to make that existed only in his head,” Ozshan adds. “I read scenes. A year later he’s like, ‘Can you shoot one thing?’ I shot that, thought that was it. A year later he asked me to do a little more. Before I knew it, I’d shot four episodes. No one ever actually asked me to do it.”

“None of it made sense to anyone. You took it on faith that it would piece together.”

Shankar attributes part of his working style on Guardians to his experiences on other productions.

“When I'm around movie people, I end up complaining how inefficient and silly the movie business is,” he says. “They're doing things in a way because that's how they did them yesterday.”

Thumbing his nose at Hollywood’s way of doing things is very much in the tradition of his “Bootleg Universe” — Shankar’s collection of fan films that reinterpret his favorite superheroes, none of which had the official approval of the copyright owners.

“Going on YouTube and dropping an 11-minute short film with Thomas Jane as the Punisher, that’s an act of rebellion when you're talking about the biggest companies in the world that control culture, government, and legislation,” he says. “It's not an act of rebellion to put something on Google. It's an act of stupidity at this point.”

“We used to get amazing drops on the internet,” Shankar says of the time when indie filmmakers and the first wave of vloggers found ways around the traditional studio system by putting original videos on places like YouTube and Vimeo.

“You have independent creators and voices building the way, showing a [direct-to-consumer] model that can work,” he says of that time.

“That era of the internet is over,” he says. “We had interesting artists doing stuff. They were people broadcasting themselves.”

“Then the corporations came in and developed the business model,” he adds. “They created an ecosystem where the only version of this that works are blogs and podcasts; you just sit and record.”

In 2015, one of Shankar’s short films, POWER/RANGERS, went viral on the internet with its dark interpretation of the 1993 TV show Mighty Morphin Power Rangers. It is one of several short films in the Bootleg Universe.YouTube.com/Adi Shankar's BOOTLEG UNIVERSE
In 2022, Shankar once again tells a story of dark superheroes with The Guardians of Justice (Will Save You). The show includes a large ensemble cast, including ex-pro wrestler Dallas Page in the lead role of “Night Hawk.”Netflix

Adi Shankar, it seems, is as bored by the internet as he is by traditional Hollywood.

In the Bootleg shorts — which include 2012’s The Punisher: Dirty Laundry, 2013’s Venom: Truth in Journalism, and 2015’s POWER/RANGERS — there’s an absence of colorful iconography and binary morality of good and evil that are typical of the genre as it currently exists. Everything is thematically presented and lit in desaturated grays. The stories similarly explore broader themes, like street justice or the loss of innocence via the military-industrial complex.

Guardians of Justice, which wields its own IP (albeit with obvious allusions to Marvel, DC Comics, and beyond), lives up to the Bootleg Universe’s spirit while forging its own way.

To Shankar, the most defiant comics epics — which he defines as Watchmen, The Dark Knight Rises, and Chris Claremont’s and Grant Morrison’s X-Men — are not about superheroes. Neither are the most successful modern takes on the genre. WandaVision is about grief. Jessica Jones dealt with domestic abuse. The Boys is about corporate power. Invincible, Hawkeye, and Shang-Chi showed how secrets split families.

“When you look at the vast majority of superhero entertainment, there's a motif there: People wearing costumes and capes and stuff. But there's a narrative construct through which they exist,” Shankar says. “They can’t just all be fighting Magneto forever. The superhero genre stopped being the superhero genre a long time ago.”

Guardians of Justice addresses its genre, but with Shankar’s distinct signatures.

“[The show] is how it feels to be inside my head,” Shankar says. “I’ll have interactions that feel like a cartoon. Sometimes it’s Fleischer-esque, sometimes it’s anime. Every day of my life is kind of like weaving in and out of different mediums and tones.”

“No one fucking knows what's going on in his head,” Ozshan says. “The guy operates on a quantum level. He's got a vision that comes from another dimension.”

He adds, “Working with him means trusting, entirely, the guy knows what he's doing. You're walking a trapeze wire with Adi all the time.”

“That journey is more important than the destination.”

But Ozshan, like Shankar, believes in the show’s potential to disrupt a culture in stasis. “It’s the culmination of the last 100 years distilled into 30-minute episodes of madness,” he says. He describes the show with fluidity, “like jazz.”

“You’re not listening for the chorus the way you listen to a pop song. You’re going with the artist on the journey,” Ozshan explains. “You land where you’re supposed to land emotionally and intellectually, but you take a very circuitous route to get there. That journey is more important than the destination.”

While its presence on the corporate and data-driven Netflix may run counter to Shankar’s principles of a disruptive and democratized internet, he is determined to maintain his sense of self.

“The successful filmmakers from any era were ultimately the guys and gals who were able to work within the system, but not get gobbled up by the system,” he says. “That's what I'm trying to do.”

Case in point: Shankar knows how he could continue the saga of the Guardians of Justice beyond the show’s six episodes — a virtual must in our era of expanding cinematic universes.

But he doesn’t want to expand it.

“I’m making the broad point that this existed intentionally as a commentary on other things,” he says. “It stops being a commentary the more it starts emulating them.”

The Guardians of Justice (Will Save You) is streaming now on Netflix.