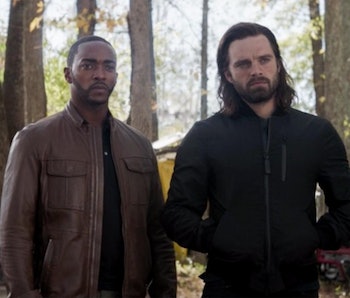 The plot of the upcoming Marvel series has largely been kept under wraps. The only thing we know for sure is that Sam did not take up the mantle of Captain America, despite being gifted the superhero’s shield at the end of Endgame — he’ll presumably be replaced by a Captain America ripoff named U.S. Agent. A number of actors have also been cast in undisclosed roles and even Baron Zemo, a past antagonist, could become an ally (at least for a while).

According to series writer Derek Kolstad, another villain may be on the way to the Disney+ series. Speaking on the Script Apart podcast, Kolstad hinted at what’s in store for The Falcon and the Winter Soldier.

“There are characters from the earliest Marvel movies that are coming back. We’re layering them in and reinventing them in a way that’s gonna shift the storytelling structure. It’s f—king awesome.”

The first two MCU phases were packed with great heroes and villains alike, so there's plenty of fodder for speculation here. There's certainly a chance for Thaddeus “Thunderbolt” Ross to appear. A set leak photo hinted at his reappearance in Black Widow, though the reason why he's there remains unclear.

Keeping in mind that the Disney+ series will likely have a similar tone to The Winter Soldier, it’s possible that one of the returning baddies will be none other than Dr. Arnim Zola. The conniving HYDRA scientist first appeared in Captain America: The First Avenger and joined the ranks of S.H.I.E.L.D. after World War II. Of course, Zola used his new position to help rebuild HYDRA from within the organization and was also responsible for Bucky’s brainwashing.

Following his death, Zola’s consciousness was uploaded into a computer system that turned him into an AI and he carried on with his evil plans unperturbed. He was discovered to be alive in The Winter Soldier, but his return was short-lived when missiles destroyed Zola’s Camp Lehigh location in an attempt to assassinate Captain America and Black Widow. Or so we thought. Like Ultron, however, Zola did not take one AI form. He was a part of an entire computer network and his mind could still be alive in cyberspace.

The evil scientist once described himself as a “beautiful parasite” living inside S.H.I.E.L.D. Who’s to say that his consciousness wasn’t somehow restored by other HYDRA agents? He was their inside man and a leader in disturbing experimentation. Perhaps Zemo is the culprit who brings him back to serve his own nefarious plans, whatever they may be.

The post-Endgame world is full of possibilities and “reinventing” old villains like Arnim Zola might be the best way to merge the past with the present and kickoff The Falcon and the Winter Soldier in style.

The Falcon and the Winter Soldier premieres on Disney+ in 2021.