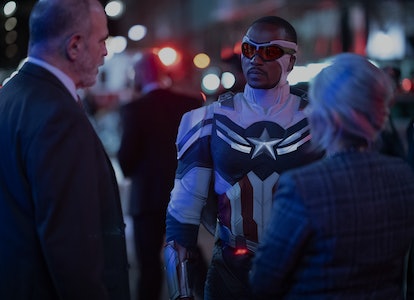 There are two types of people. Those who begrudgingly watch Honest Trailers, and those who have never heard of the satirical pop culture YouTube series. But Honest Trailers usually has at least one clever thing to say about each show or movie, and its take on The Falcon and the Winter Soldier is no exception.

Released on May 4, the newest fake trailer confirms something we’ve been thinking for weeks but were almost too afraid to say: Sam Wilson’s inspiring Captain America speech at the end of Falcon and the Winter Soldier is actually kind of terrible.

Here’s a key quote from the Honest Trailers video, which is intercut with a clip from the scene in question:

“Sam must become a new kind of Captain America, one who will call out the problems with our system, then ask them to do better and hope that it changes anything. Honestly, the fact that this speech works is the least realistic part of the MCU.”

It’s worth noting that Sam really is a new kind of Captain America. Unlike Steve Rogers, who could get away with sharing a few encouraging words to help those around him power through difficult challenges, Sam is trying to fix a corrupt system. Still, telling a bunch of corrupt politicians to “do better” probably isn’t going to fix anything — and that goofy white cowl isn’t helping either.

Look, it’s fine. He makes some good points and I don’t actually hate this Captain America costume as much I should, but Sam’s “do better” moment lands with a thud, especially next to this iconic moment from Captain America: The Winter Soldier:

Or Cap’s famous “Whatever it takes” speech in Avengers: Endgame:

It may not be a fair comparison. Steve’s speeches are designed to uplift and motivate, but they’re also essentially apolitical (unless you’re a fan of HYDRA or Thanos). Sam is trying to mix motivation and politics, which is difficult enough for an actual politician, let alone an ex-soldier in a skintight red-white-and-blue costume with wings.

Still, at the very least, maybe the team behind The Falcon and the Winter Soldier should have consulted the Russo Brothers (who directed both Winter Soldier and Endgame) on how to pull off a good Captain America speech. It never hurts to ask for help, right?

You can check out the full Honest Trailer below, which also touches on another Falcon and the Winter Soldier flaw I’ve been complaining about for weeks: the terrible portrayal of the Flag-Smashers.